Are you planning your next vacation and wondering, “Where can I go to visit an island covered with creepy hanging decaying dolls?”

Turns out you’re in luck! I have just the place for you. It’s called Isla de las Munecas or Island of the Dolls, and it’s one of Mexico’s most unique tourist attractions… 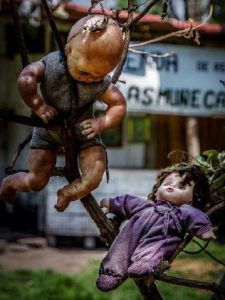 Back in the 1950s, a man named Don Julian Santana left his family and went off the grid, living alone on an island on Teshuilo Lake in the Xochimilco canals, not far from Mexico City. No one seems to know why he chose to become a recluse.

What is known, however, is that Don Julian began to collect lost dolls – some salvaged from the canals, some rescued from the trash on the island, some donated by locals. He even traded produce he had grown to his neighbors in order to acquire more dolls… anything from baby dolls to Barbies to plush Muppets. Over the decades that he lived on the island, he scavenged over 1500 dolls and hung them all around from nooses, on spikes, on trees, walls, fences… pretty much everywhere.

Not only did Don Julian hang the dolls from every available tree, wall, and surface, but he also filled his cabin with dolls and dressed them up in colorful clothing, headdresses, sunglasses, and other accessories. 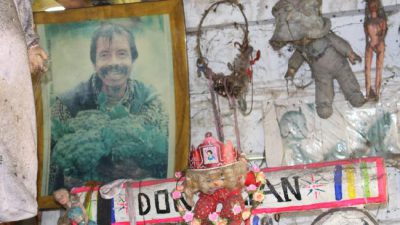 Though many of them are missing heads, eyes, limbs, or stuffing, he didn’t try to fix them or clean them up; instead, he basically hung them up as-is, in whatever state of disarray or ruin he found them in. Overall, the dolls are pretty badly decayed. Even the ones that started out in decent shape were eventually cracked, faded, and bedraggled by years of wind and weather.

When asked what inspired his bizarre hobby/obsession, Don Julian claimed that shortly after he moved to the island, he had found the body of a little girl who had drowned in the lake/canal, with her doll floating nearby.  He was so moved by her death that he covered the island with dolls to honor her memory and appease her restless spirit.  Then again, his fellow islanders (as well as his own relatives) say there was no such drowned child, and he made it all up. 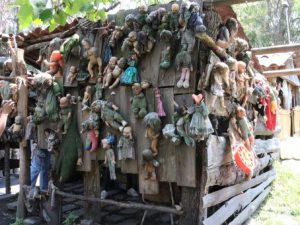 Though most people are thoroughly creeped out by the island, Don Julian loved the dolls and saw them as good luck charms and a beautiful tribute to a lost child.  He believed that the dolls would provide protection against further tragedy. For many years he welcomed visitors and gave them personal tours of the island for a small fee, including photo-ops with the decaying dolls.

And as if Don Julian’s story wasn’t strange enough already, consider the circumstances of his mysterious death. In 2001, his nephew found him dead – drowned in the canal at the same spot where he had discovered the dead girl who inspired what became his life’s work.

Do you dare to visit the Island of Creepy Dolls? If you’re in the vicinity of Mexico City, the island is located in Xochimilco Borough, about 17 miles south of Mexico City. Isla de las Munecas is about a four-hour round trip by ferry from the Embarcedero Cuemanco or Embarcadero Fernando Celada.