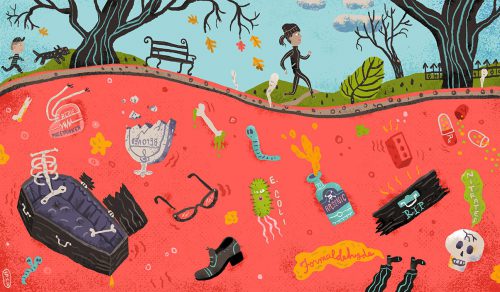 Throughout human history, people have set aside special final resting places for their dead. But as population density (including deceased cemetery residents) increased, the byproducts of decomposition were concentrated in such quantities that it became a public health issue.

The human body is mostly made up of water, carbon and salts with potassium, iron, and other compounds. When a body decomposes, it transforms into a salty liquid known as necroleachate, which has a distinctive fishy smell. Every 15-16 pounds of body weight yields about a gallon of necroleachate.  The problem arises when hundreds or thousands of corpses are collected together in one area, and large amounts of this substance seep into the ground and get into the soil and the groundwater.

But that’s not all that ends up contaminating the soil and water beneath the cemetery – there are also pathogens like E. coli and the bacteria that cause cholera, anthrax, and typhoid fever. And of course you have embalming fluid, formaldehyde… even chemicals from the clothing, medical devices, and makeup of the dead, not to mention the other toxic products of decomposition… contaminants that present a public health hazard when concentrated in one area.

There are things lurking beneath the graveyard that are way scarier than vampires and zombies. Read the entire article at Atlas Obscura!