Lizzie Borden Took an Axe… or Did She? 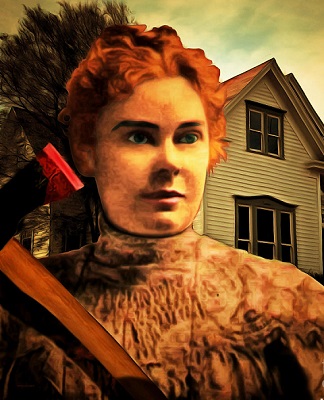 And gave her mother Forty Whacks.

When she saw what she had done

She gave her father Forty-One.”

Thanks to the schoolyard rhyme, even little children know the basics of Lizzie Borden’s story. On a hot summer day – August 4, 1892, exactly 126 years ago this week – wealthy businessman Andrew Borden and his wife Abby were found hacked to death in their home in Fall River, Massachusetts.

As everyone also knows, Andrew’s unmarried 32-year-old daughter Lizzie was accused of the double homicide. The sensational nature of the crime attracted national press attention, and every detail of Lizzie’s trial was meticulously reported to a breathless public. Eventually, the jury found Lizzie innocent of all charges related to the murders. No other suspect was named, and the case remained unsolved.

After her acquittal in June 1893, Lizzie and her sister inherited her father’s entire estate, worth about $8 million in today’s dollars. Lizzie sold the Borden house and moved across town to a new and better home, which she named Maplecroft. She lived there with her sister, Emma, until a violent argument in 1905 sent Emma fleeing from the house; after that, the sisters never saw each other again. Lizzie remained at the house until her death from complications from gallbladder surgery in 1927. 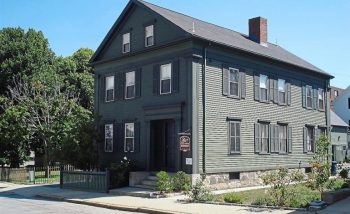 So why does this particular murder case remain in the public consciousness well over a century after the events took place? They’re still writing books and making movies about Lizzie Borden, and the B&B that operates in the Borden Murder House is a popular Dark Tourism destination, doing turn-away business, hosting ghost tours and very brave overnight guests.

What made the Borden case unique among other murder cases of that time? Perhaps it was the combination of an unlikely suspect, the rise of sensationalized journalism, and the fact that it offered a morbid and wry critique of high society. 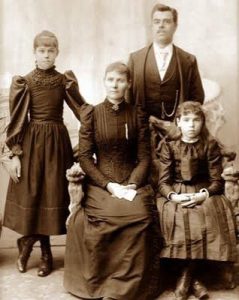 Elizabeth Andrew Borden was born on July 19, 1860, the second child of Andrew and Sarah Borden. Her mother died when Lizzie was only 3, and Andrew married his second wife, Abigail Durfee Gray, in 1865.

The Bordens were a tremendously dysfunctional family, and theirs was most definitely not a happy home.  Lizzie resented her stepmother, certain that Abby was only after her father’s money and referring to her coldly as “Mrs. Borden.” Borden family battle royales were notorious in the neighborhood, as loud and violent family arguments could often be heard coming from inside the house. These arguments were said to have intensified in the days leading up to the murders.

The entire Borden household was also said to be extremely ill during that time, leading to suspicions of attempted poisoning (more likely the result of a spoiled mutton stew). Andrew Borden was an unpleasant man, and it’s possible that an enemy or business rival was responsible for the murders, though there has never been any actual evidence to back this up.

Here are the forensic facts of the case as they’re known: 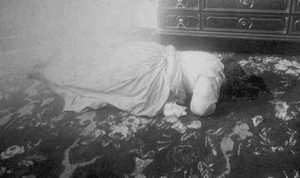 At about 9 a.m. on the morning of Thursday, August 4, 1892, Abby Borden was making the bed in the second-floor guest bedroom when she was attacked by an unknown assailant with an axe. Forensic evidence suggests she was facing her attacker when the first blow was struck. She fell to the floor, where another 19 blows were delivered to the back of her head, nearly obliterating her skull. 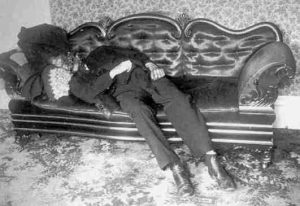 Andrew, who was out of the house at the time his wife was killed, returned home for his mid-day break at around 10:30 a.m. and as he had a habit of doing, stretched out on the sofa for a nap. He was obviously unaware of the grisly scene upstairs. While he slept, he also was attacked by an unknown assailant, sustaining 11 axe wounds to his face.

The family maid, Bridget Sullivan, had been resting in her upper story room, still weak from nausea and vomiting as well as the stifling August heat. She was awakened by Lizzie’s screams shortly after 11 a.m. – “Come quick! Father’s dead. Somebody came in and killed him!”

Most true crime investigators agree that Lizzie was almost certainly responsible for the murders of her father and stepmother. There have been many theories regarding Lizzie’s potential motives, including that she was the victim of incest at the hand of her father, or was angry with him for killing her pet pigeons, or simply sick of his strict and rigid ways, ready to inherit his wealth and stop living under his thumb. None can be proven – but that only adds to her mystique.

Other than Lizzie, who was at the house during the killings, there were really no other serious suspects in the case. Her sister, Emma, was out of town, and her uncle John Morse who had been staying with the Bordens had an alibi. 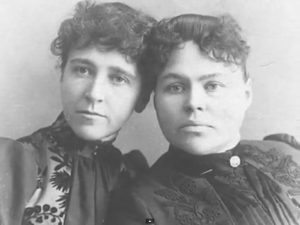 The murderer (if not Lizzie) would have had to hide in the house with Abby’s mutilated corpse for over an hour without anyone noticing before Andrew’s murder. This sort of methodical patience doesn’t seem likely in view of the brutal violence shown in the attacks.

Police were immediately called, but unfortunately, the forensic details of the Borden murders were hopelessly compromised from the beginning. Thousands of curious townspeople were actually allowed to enter the house and wander around the crime scene, unintentionally corrupting forensic evidence. Not to mention that the autopsies were conducted on the Bordens’ dining room table.

Lizzie was subjected to extensive interrogation, and her answers were often muddled and contradictory. During questioning, Lizzie was flustered and erratic, frequently changing her story or flying into a rage. 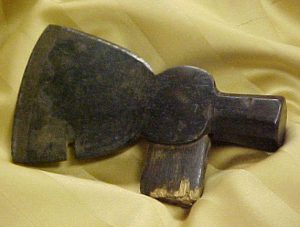 Upon searching the property, investigators found two hatchets, two axes, and a hatchet head with a broken handle in the basement of the Borden home.

Later that evening, the Mayor of Fall River visited Lizzie and Emma to inform them that Lizzie was a suspect in her parents’ murder. After his departure, Bridget witnessed Lizzie burning a dress in a barrel behind the house. Could it have been the dress she was wearing during the murders? Lizzie claimed she was just disposing of it because she had gotten paint on it.

Lizzie’s testimony at the inquest was also inconsistent, perhaps due in part to the fact that she was prescribed morphine after the murders to help calm her nerves. 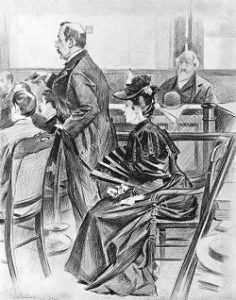 It didn’t take long after Lizzie Borden was accused of murdering her father and stepmother for the public to start obsessing over the case. Newspaper coverage began immediately after that hot August day in 1892, and centered on the fact that a prim, proper, churchgoing spinster lady in Fall River, Massachusetts, may have brutally killed two members of her family with a hatchet.

In addition to the fact that the only real suspect was acquitted and the case was never solved, the murder and trial occurred during a time when the quantity, quality, and content of American newspapers was changing rapidly.

Lizzie’s was one of the first trials in American history that both fueled and was fueled by major mass-market newspapers and magazines. In those days, newspapers often took liberties when reporting the facts – a common practice in 19th century reporting culture, which focused more on sensationalism, crime, and vice than accuracy. 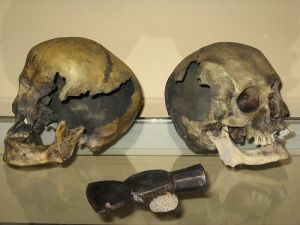 Because the case and trial had so many lurid components, articles often featured very dramatic accounts of what happened in the courtroom – for example, when Lizzie fainted at the sight of her father and stepmother’s severed heads, which were brought in as evidence.

On slower news days, reporters would comment that Lizzie was yawning or looked bored during the trial, planting the seed that a woman exhibiting boredom by such a gory event might be capable of murder. Her every move made headlines.

In part, Lizzie became a media sensation because her trial exposed the sleazy shortcomings of high society, delighting the poorer masses. The prosecution – and in turn, the media – used the trial to convey that the wealthy are not exempt from unsavory, violent behavior. Lizzie’s defense was, in some ways, a defense of upper-class society; an attempt to demonstrate that someone from her background – especially a prim and proper churchgoing woman – could not have possibly committed a brutal murder. Anyway, Victorian female murderers were much more likely to administer poison to their victims rather than a violent attack. 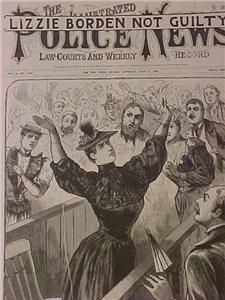 In the end, the defense was able to convince the jury (proper Victorian citizens all), that it was unthinkable that an upper-class woman could be responsible for such a horrific crime. Lizzie was acquitted of all charges in June 1893 and set free.

Yet despite her acquittal, the public in general considered her the smirking spinster who got away with murder, and she lived the rest of her life as a virtual recluse. 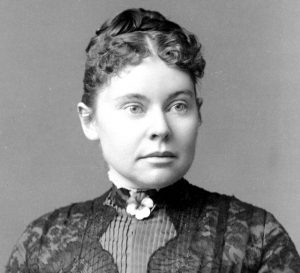 So why does Lizzie Borden remain a part of American pop culture nearly a century after her death?

Essentially because the salacious elements and the uncertainty surrounding the Borden murders have become part of modern American mythology.

Experts have noted that a memorable historical murder typically highlights a particular social insight or reality that society had repressed or ignored until that moment. The Borden case made the public aware of the reality of violence in private families, even ones that seem outwardly affluent or normal.

Other similar cases of note include the Jack the Ripper murders, which highlighted the miserable lives of 19th century prostitutes and the vast divide of social class between them and the often very affluent men who were their customers. More recently, the OJ Simpson case drew attention to issues of race in the criminal justice system, the invulnerability of celebrity, and the existence of domestic violence even in a wealthy household.

These are events that challenge the status quo and defy the covering up of shameful repression. Sometimes they shock societal norms, confirm our worst fears about ourselves, or reflect the anxieties of the era they occur (which we can look back upon with more objectivity).

In addition to the unlikely suspect and violent murder weapon, one thing that makes the Borden tragedy so fascinating is simple – Time. The fact that the Borden murders took place so long ago detaches us from the trauma and violence, making it less real to us and more just a compelling story.

Part of the appeal of Lizzie’s story is what they call “voyeuristic magnetism” – she may indeed have pulled off the perfect crime, literally getting away with murder. With the horrors that can be seen in real life today (not to mention movies and TV), it’s not that shocking to believe that a young woman murdered her parents; in fact, it’s almost expected. Lizzie was in a way the Menendez brothers or Casey Anthony of her day.

Our obsession exists because we’re simultaneously scared of and fascinated by death – as long it happens in the past – and to someone else. 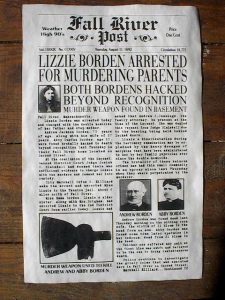 So despite her acquittal, Lizzie was shunned for the rest of her life by her community; most people in Fall River believed that she (like OJ) killed two people and got away with it.

Nonetheless, Lizzie went on to become an enduring pop culture figure, inspiring not just schoolyard rhymes but all kinds of art, including a ballet and a rock opera, movies and TV shows (with another movie in the works), and numerous fiction and nonfiction books.

Today, you can not only take a tour of the Borden Murder House, but you can even spend the night in the room where Abby Borden was murdered. Not everyone can take it – a number of guests have checked out in the middle of the night, too frightened by ghostly manifestations to make it until morning.