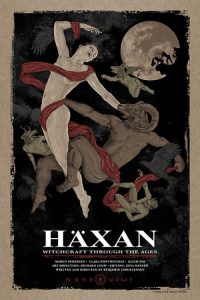 “Wonderful though this picture is, it is absolutely unfit for public exhibition.” – Variety, 1923

How do I begin to describe Haxan? The first thing that comes to mind is “One of a Kind.”

Haxan, possibly the most controversial film of the Silent Era, is a mashup of horror film and documentary from a time when both of these genres were in their infancy. It’s not exactly a horror film, but it certainly isn’t your typical documentary.

Director Benjamin Christensen spent years studying the history of witchcraft and the human suffering caused by efforts to stamp it out. Much of the film is based on Malleus Maleficarum (The Hammer of Witches), a 15th-century handbook on how to identify and defeat Satan’s minions.

The early history of witchcraft is represented by medieval engravings and woodcuts depicting demons, witches, and other satanic subjects as well as the persecution of these evildoers being brought to God’s justice. 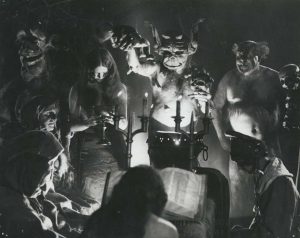 Superstition and religious mania make people do crazy things – nuns go mad, housemaids administer lust potions to their priestly employers, and paranoid people torture women to force them to confess to dealings with the Devil.

Haxan is surprisingly explicit (especially for its time), full of sexual situations and disturbing images. Swedish censors demanded that many scenes be cut from the film before they would authorize its release.  Still, Haxan was banned for many years outside Sweden for anti-Catholic images, pornography, depiction of torture, and devil worship. (All these cut scenes were eventually restored in later versions.)

Christensen himself seemed like a pretty quirky guy. He really got into the spirit of things – he plays the Devil, who apparently has an extremely active libido, and he has a tongue thing going on that Gene Simmons would die for. Interestingly enough, he also appears briefly as Jesus (such modesty!) and briefly at the beginning of the film as himself.

He also insisted that all filming – even interior shots –be done at night because he believed his actors couldn’t focus on the dark side of human nature if the sun was shining.

In the end, Christensen attributes the deviant female behavior that was once condemned as witchcraft to mental illness (“female hysteria”). Though he makes the case that these women need help, not punishment, it’s still pretty condescending and sexist.

Because Haxan fell into the public domain long ago, there are a lot of inferior prints on the market. The Criterion Collection version is the best, based on a 1968 restoration for modern audiences, with title cards being replaced with voiceover narration from author William S. Burroughs.  On the downside, someone had the bright idea to add a jazz soundtrack, which is an auditory abomination that just doesn’t work.

Though it’s been surpassed in shock value on both documentary and horror film fronts, Haxan’s influence is still felt today. In fact, 77 years later, the makers of The Blair Witch Project  (1999) paid homage to it by naming their production company “Haxan Films.”