You’re Toast! Everything You Ever Wanted to Know About Getting Burned at the Stake 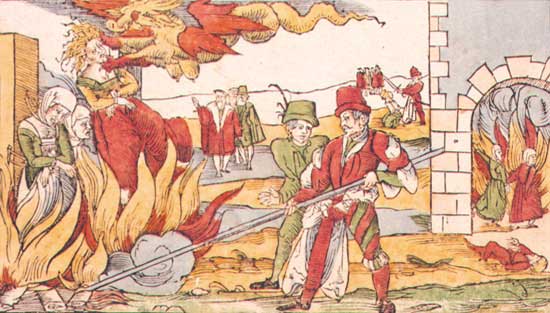 Hey Torquemada, whaddaya say?
I just got back from the auto-da-fé!
Auto-da-fé, what’s an auto-da-fé?
It’s what you oughtn’t to do but you do anyway!

–  Mel Brooks, History of the World Part I “The Inquisition”

The Middle Ages were a truly barbarous time… and a very bad time to be accused of certain crimes or get on the wrong side of religious authorities. It wasn’t really that long ago that both Church and State were guilty of inflicting cruel, systematic, and deliberate physical and mental suffering upon fellow human beings, especially those who stood accused of practicing the Dark Arts.

Between the various Inquisitions and periodic witchcraft hysteria, torturers and executioners were busily devising creative methods of inflicting torment upon accused evildoers and then applying them with gusto. With no laws to protect the accused, they were free to improvise as they pleased. After extracting the unfortunate victim’s confession (or sometimes even without one), execution usually followed quickly after, which in itself was likely also a horrific form of torture.

One preferred method of the Inquisition and of witch hunters was death by fire, aka burning at the stake. It was an especially popular way to punish heresy, blasphemy, and witchcraft in both Protestant and Catholic countries. The Inquisition even made mass executions into a civic festival – the auto-da-fé (“act of faith”) – where multiple convicted heretics or witches were put through a ritual of public penance and torture, with death as the usual outcome. 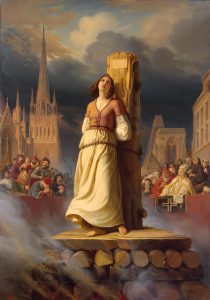 Hundreds of thousands of people suffered the torments of the auto-da-fé. Joan of Arc, burned for heresy in 1431 (because they couldn’t get her for other charges, she was actually sentenced to death for cross-dressing!), is perhaps the most famous person to die this way, but it’s believed that from the middle Medieval period until the practice fell out of favor, at least 200,000 people were executed by fire. 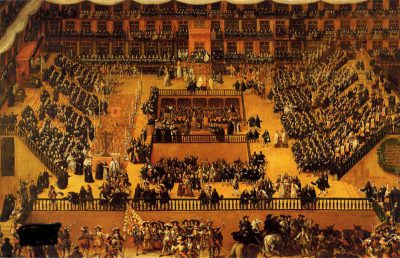 It was a popular form of public theater.

The auto da fé became a public spectacle where heretics, witches, blasphemers and others (your garden-variety Protestants, Muslims, Jews, and skeptics) were tortured and likely eventually executed. Huge crowds turned out to watch the proceedings, and over time, the pageantry and drama became even more elaborate.

Depending on the number of accused and the specific crimes, the festivities could last for hours – or even days. The pre-show might begin the night before the spectacle itself with a procession that included church officials and a choir marching through the streets. A second procession including civic officials and aristocrats would take place the following morning.

The Church would set up a stage with pulpits, rich furnishings for the noble guests, tapestries, fine cloth draped for decoration and to serve as a canopy over the stage. No expense was spared in order to show the power and the authority of the ecclesiastical authorities in this matter. Naturally, everyone from nobles to peasants would show up dressed in their Sunday best. After the processions, the ceremony began with a sermon and a long declaration of what constituted the True Faith. Spectators were required to swear an oath of loyalty, and then the real “trial” would begin.

The auto da fé was the medieval equivalent of Must-See TV – those who couldn’t make it for the main event were eager to read or listen to a recap of any proceedings they might have missed. 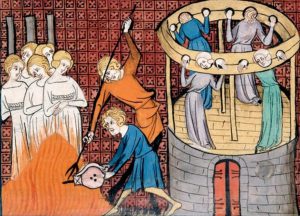 Let’s face it – any woman in medieval Europe or Latin America who was independent-minded, who was a midwife or a healer, or was at odds with her neighbors stood a chance of being accused of witchcraft.  When disease came or crops failed, the relative powerlessness of women made them useful scapegoats, especially in times of religious anti-witchcraft hysteria.

But there’s another reason why the victims of execution by burning (for witchcraft or other serious crimes) were disproportionately female – feminine modesty.

Witches and heretics were often condemned to the flames because fire was considered purifying. But it was also the punishment of choice for women who had committed particularly heinous civil crimes, like murdering their husbands or high treason. Men who were found guilty of these crimes were typically hanged and then disemboweled, but the fairer sex was burned instead to “protect their dignity.” The delicate sensibilities of the condemning panel considered it indecent for a woman’s body to be publicly mangled, but didn’t seem to have a problem with publicly burning her alive. 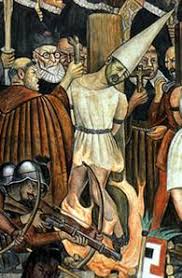 The accused were dressed in special clothing to mark and humiliate them.

As part of the spectacle of the auto da fé, prisoners had to wear the Sanbenito, a yellow tunic decorated with symbols and colors that represented the prisoner’s offenses. Those who were condemned to die wore the Samarra tunic, which was decorated with pictures of flames. Frequently a large pointed hat (like a dunce’s cap) was also part of the ensemble. The prisoner would be paraded through the streets in this outfit with a rope around their neck and carrying a candle. 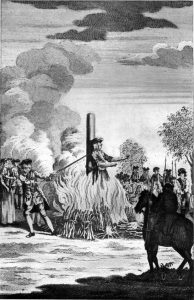 Some victims were already dead.

If the accused chose to confess and repent, they might be shown mercy of sorts (alas, no plea bargains in the Inquisition!) by being strangled or otherwise dispatched before the flames would reach them.

A condemned woman would often be bound to the stake with a rope or chain around her neck or positioned on a stool. The fire would be lit, but before it reached the victim, the noose or chain would be tightened or the stool kicked away, and (hopefully) she would be strangled before the fire got hold of her. If need be, the executioner could help things along with a well-placed blow to the head or spear to the chest to hasten the unfortunate woman’s demise.

The accused who refused to repent were condemned to face the flames alive and conscious, writhing in agony to the jeering of the crowd. Unfortunately, these live victims often were positioned too high above the flames and were therefore slow-roasted rather than actually burned to death.

Some, however, went out with a bang.

In case you’re thinking only women were the beneficiaries of the executioner’s mercy, some men (mostly heretics) were offered bags of gunpowder to tie between their legs and under each arm. If the condemned was lucky enough to have a well-lit fire, he would soon meet a quick and explosive end.  But others weren’t so fortunate – if the wood was too green or the wind too strong, they would often suffer for quite some time before a compassionate bystander or just the right leap of flame put an end to their suffering.

For the condemned men and women who faced the flames while still alive, death usually resulted from carbon monoxide poisoning before the flames consumed their bodies. This was often the case when a large number of prisoners were being executed, as it required a much bigger fire. If the fire was smaller or poorly built by an inexperienced executioner, however, death was more likely to result from blood and fluid loss, heatstroke, or simply thermal decomposition of body parts – i.e., combustion. 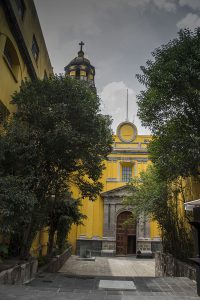 It’s not as “medieval” as you think…

Believe it or not, the Inquisition was still going strong, especially in Latin America, until the early 19th century. That’s right – it wasn’t all that long ago that people were still being burned at the stake. The last known public execution of a heretic by burning took place in Mexico in 1826, and the last auto-da-fé also took place there in 1850.

In the photo at left, the Convent of San Diego in Mexico City bears a plaque in memory of the victims of the Inquisition who were burned in its courtyard.