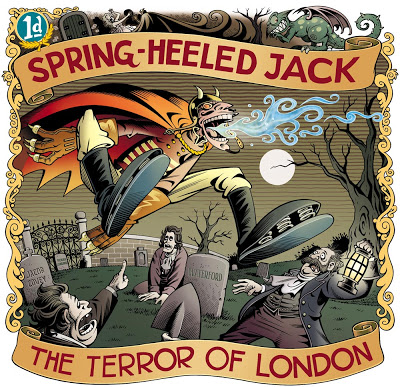 If you think this is about “The Ripper,” you don’t know Jack…

When you think of a scary dude named Jack from Victorian England, “Jack the Ripper” is probably the first one who comes to mind.

Of course, the Ripper may have been the most notorious “Jack” of his time, but there was another Jack who was also widely feared throughout England… Spring-Heeled Jack, a fire-breathing devil-man whose supernatural power was… being able to jump really, really high. 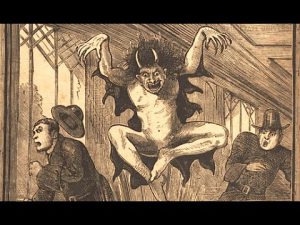 Some said he was a monster or a demon, while others thought he was just an extraordinarily agile human. But no matter what you believed, Spring-Heeled Jack was once a name that inspired terror.

He first appeared around 1837, when residents of a London neighborhood began to report bizarre attacks, mostly on women, by a “ghost, imp, or devil.” The terrifying figure would ring the doorbell, and when someone answered, he would tear their clothes off with his claws. He also enjoyed ambushing innocent citizens who happened to be out for a walk. 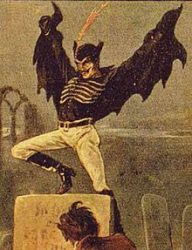 The inspiration for Batman?

Eyewitnesses described Jack as a “gentlemanly devil.” Local authorities tried to explain him away as a bunch of affluent jerks who liked to dress up and scare people on a bet. But witnesses reported that he would pounce upon or jump back from his victims in a way that no mortal man could. Thus, the legend persisted and grew.

Spring-Heeled Jack sightings ended in 1904, but his legend still survives today – he’s been cited as the inspiration for a number of characters in Steampunk novels as well as comic books… and still rocking that old-school creep factor!

Read more about the leaping devil who terrorized Victorian England at Atlas Obscura!