Last week marked the 50th anniversary (February 2, 1969) of the passing of Boris Karloff, one of the most significant figures in horror film history.

But despite his menacing demeanor, vaguely Eastern-European-sounding name, and penchant for playing monsters, they say Boris Karloff was actually a very proper Englishman whose true passions in life were gardening and cricket.

He was born William Henry Pratt in 1887 in London, the youngest of nine children. His choice to pursue an acting career met with disapproval from his family, who expected him to follow his older brother, Sir John Thomas Pratt, into the British Foreign Service. But all his life, he had wanted to become an actor… so he deliberately failed the Consular Service exam.

According to his daughter Sara Karloff, he got his dark looks from East Indian ancestry in his father’s family. She also said that Karloff  was an old family name on his mother’s side, and that he changed his name to avoid embarrassing his family. He also said that he thought Pratt wasn’t a good name for an actor – it reminded him of pratfalls. Why Boris? He chose it because it sounded good. 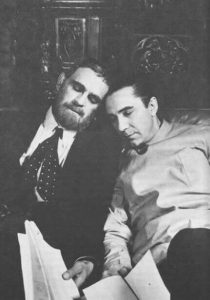 Boris and Bela having a little downtime between takes

There’s much more to Boris Karloff than just Frankenstein’s Monster and Imhotep!  In my research this week, I learned some interesting facts about Karloff that were new to me…

For more fascinating facts about Boris Karloff, check out this article at Decades.com!