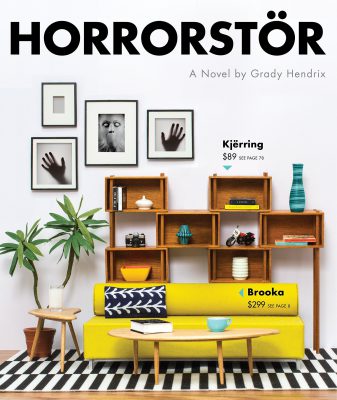 If you think working retail is torture… you ain’t seen nothin’ yet.

One of the great tropes of horror literature is the Haunted House, or as Stephen King describes it in Danse Macabre, The Bad Place.

The Bad Place can be anywhere that a familiar or benign space (such as a house) is intruded upon by some sort of event or history that transforms it into something evil, or at least something eerie or disquieting that feels “wrong” somehow.

When we imagine a haunted place, the first thing we usually think of is a spooky Victorian mansion or crumbling ancient manse of some kind – a place that was once someone’s home – where something terrible occurred. But in Horrorstör, a novel by Grady Hendrix, The Bad Place is something utterly bland and banal – it’s a suburban big-box Scandinavian assemble-it-yourself home goods store called “ORSK.”

Of course, you’re 100% right if that reminds you of another Swedish furniture store with a four-letter name. In fact, the cover itself could easily be mistaken for an IKEA catalog cover, right down to the photography, sleek Nordic style, and unpronounceable product names.

Beyond the cover and throughout the book, the author’s approach to design and layout is fun and creative. For example, each chapter heading features IKEA-style product illustrations that start out as mundane household items. As the supernatural horror action kicks in, the names and product descriptions (all of which include 666 as part of the item number) get weirder and weirder until they’re no longer describing shelving units and futons, but actual torture devices. 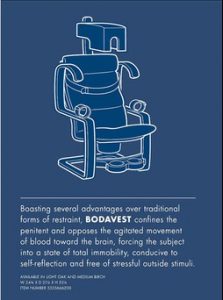 The protagonist of Horrorstör is Amy Porter, a wage slave at the ORSK flagship store in suburban Cleveland. Amy is a directionless 20-something with no faith in herself, no useful skills, and no aspirations… but plenty of student loan debt. She deeply resents (yet is dependent on) her low-skill/low-paying job, and she knows it’s only a matter of time until her by-the-book boss will fire her for her bad attitude. Amy wants to get out – at least transfer to another store – but she’s in a bad way financially with no real prospects on the horizon.

It seems that strange happenings have been going on at ORSK after hours – acts of vandalism, mysterious graffiti appearing spontaneously on the walls, unexplainable glitches in the electrical systems – but nothing has been captured on the store’s surveillance cameras.  Amy’s boss, Basil Washington (described as a “taller version of Steve Urkel”), is determined to get to the bottom of the disturbances before corporate auditors arrive the next morning for an inspection, and he hatches a plan to catch the perpetrators. When Basil asks Amy to volunteer for an overnight shift to help patrol the building and solve the mystery, she reluctantly agrees in exchange for a cash bonus and a transfer to a different store.

They’re joined by Amy’s cheerful colleague Ruth Ann and later by hipster coworkers Matt and Trinity, who are convinced that ghosts are responsible for the vandalism. Their interest is also self-serving – they hope to capture supernatural activity on video so they can become famous and get their own show on Bravo.

Unfortunately (and probably just as you may have guessed), Matt and Trinity pretty much nailed it.

In a nod to the “ancient Indian burial ground” trope, it turns out the store was built on the site of a 19th century prison, the Cuyahoga Panopticon, a dreadful chamber of horrors where torture and murder and all sorts of unsavory things happened. And if you’ve ever read any horror fiction, you know that shit never goes away.

In fact, certain places within the store act as portals, transporting unsuspecting customers or employees to an alternative universe where the prison still exists, still populated by hordes of undead prisoners commanded by the monstrous warden.

Who will survive until morning? The ending is reasonably predictable, but satisfying just the same. And there’s an epilogue that leaves the door wide open for a Horrorstor 2 sometime in the future. 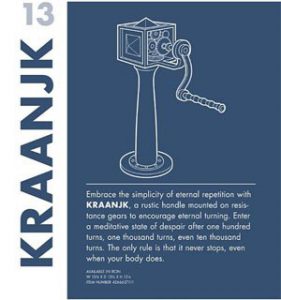 In real life, IKEA (and the fictional ORSK) stores are carefully designed to lead us along a certain path through the store from place to place to maximize our involvement. It’s called “retail hypnosis,” and it’s apparently quite an effective marketing technique.

Is Horrorstör a sly social commentary on how we’re enslaved by low-wage jobs, doomed to haunt big-box stores in the suburbs, endlessly following the paths they’ve set for us in the hope of achieving a perfect life? Or at least, a perfect Lifestyle?

Whether or not that’s the intention, Horrorstör is an engaging twist on the Haunted House/Bad Place theme with a resourceful female protagonist, unique design elements, and a healthy dose of comic relief. Hendrix has a singular talent for deftly mingling horror and humor; that’s a fine line that not all authors can walk successfully.

If you enjoy Horrorstör (named by NPR as one of the best books of 2014), I also recommend checking out some of the author’s other works, especially My Best Friend’s Exorcism, and his latest, We Sold Our Souls. He’s also the author of the Bram Stoker Award-winning Paperbacks from Hell: The Twisted History of 70s and 80s Horror Fiction. 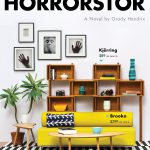