Tomb with a View 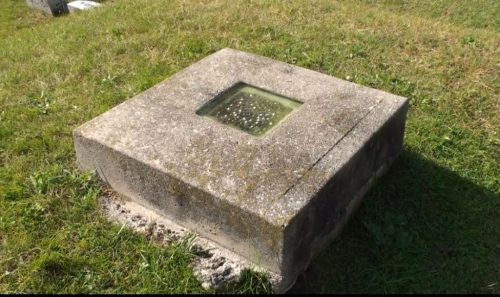 You might say things are looking up for the late Dr. Smith…

The fear of being buried alive was not uncommon in the 19th Century. Though it’s the stuff of horror novels, most of those tales are nothing more than urban legends. Yet sometimes truth can be stranger than fiction!

Take, for example, the story of Dr. Timothy Clark Smith (1821-1893) of Middlebury, Vermont. During his lifetime, Dr. Smith was quite a busy and accomplished man – a schoolteacher, a merchant, and a clerk for the Treasury Department. He obtained his MD in 1855 and became a staff surgeon in the Russian Army.

And though Dr. Smith has been dead for over a century… let’s just say that things are (still) looking up – or at least he is.

You see, Dr. Smith had a morbid fear of contracting sleeping sickness – a disease that would give the illusion of death, with the victim awakening later in a cold, dark, airless grave… but very much alive. So he made very specific arrangements for his final resting place.

When he passed away in February 1893, Dr. Smith was interred in a specially prepared grave. Beneath the odd, grassy mound of earth, Dr. Smith’s face was positioned beneath a cement tube that led to the surface. The 6-foot tube ended at a piece of 14×14 inch plate glass, allowing Tim to gaze upward and perhaps hail passersby in the event that he was buried alive.

Although condensation and plant growth inside the shaft now block the view, residents once claimed to be able to see tools that had been buried with Smith’s body to facilitate his escape if necessary, as well as a bell in his hand that he could ring should he wake up and find himself the victim of a premature burial.

Read the entire article at The Vermonter!