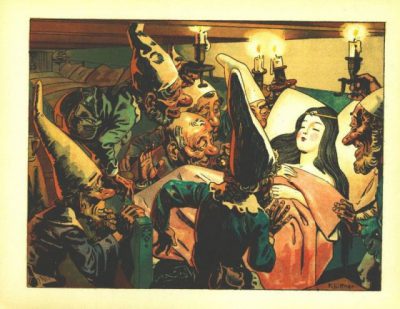 Who doesn’t love the story of Snow White, that classic (though perhaps a little retro) fairy tale where good triumphs over evil?

The story we’re all familiar with is that of an innocent young beauty who is banished by a vain, cruel, and jealous stepmother and who, with the help of seven lovable dwarfs, ultimately finds everlasting true love. Walt Disney turned the fable into the first full-length animated musical feature film in 1937.  To this day, Snow White and the Seven Dwarfs is one of the Top-10-grossing films of all time (adjusted for inflation), beloved by generations of children.

But it turns out the American animators left out a few gruesome details. Disney’s version, the Snow White we all grew up with, is but a sanitized shadow of the original German fairy tale from the Brothers Grimm… which was, in fact, a lot more grim.

For example, in both versions, the Queen orders the huntsman to take Snow White into the forest and kill her, but in the Brothers Grimm story she commands him to bring back Snow’s lungs and liver as proof! He kills a boar instead, and brings the animal’s organs back to the Queen—which the Queen thinks belong to Snow White AND SHE PROMPTLY EATS THEM! Ewww!

Read the entire article – if you have the stomach for it! – at The Vintage News!