Roaming Charges May Apply: Did Edison’s “Spirit Phone” Really Communicate with the Dead? 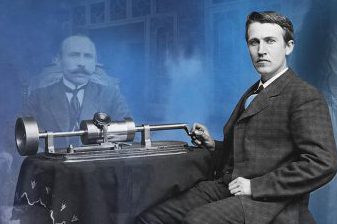 In the late 1920s, not long before his death, Thomas Edison reportedly gathered with other scientists in a secret laboratory to record the voices and presence of the dead using “speakers, generators, and other experimental equipment.”

Several years later, an article in Modern Mechanix magazine in October of 1933 described Edison’s machine, in which a “tiny pencil of light, coming from a powerful lamp, bored through the darkness and struck the active surface,” which could detect the smallest particle. These particles would be proof of the afterlife, physical bits of human personality left in the atmosphere, waiting to be discovered. Unfortunately, after “tense hours” spent watching the delicate instruments, nothing happened; which was, the magazine adds, why no one had heard of this experiment before.

It’s unclear if that exact scene actually took place, but there’s ample proof that Edison was interested in speaking to the dead using technology. In 1920, the inventor shocked the public when he told American Magazine, “I have been at work for some time, building an apparatus to see if it is possible for personalities which have left this earth to communicate with us.”

Read the entire article about Thomas Edison’s attempts to talk to the dead at Atlas Obscura!