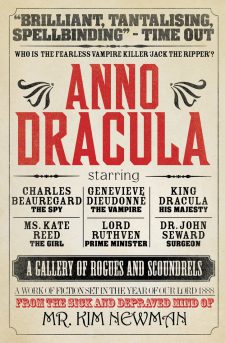 People love to wonder “What If…”

What if the South had won the Civil War? What if Hitler had beaten the Allies in World War II? What if Napoleon had a B-52 at the Battle of Waterloo or if Eleanor Roosevelt could fly? (Okay, I borrowed the last two from Saturday Night Live.)

Alternative histories, whether in literature or film, have always had a strong appeal. Maybe it’s because we feel a sense of relief, like we’ve dodged a bullet, when we imagine how much worse things could have been if history had taken a different course.

Like perhaps how the world might be a very different place… if Queen Victoria had married Dracula? 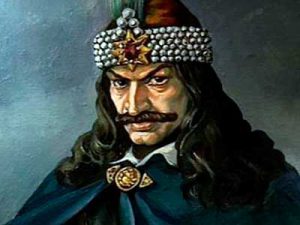 Everyone knows the basic Dracula canon – Vlad III Dracula (or “son of the dragon”), Prince of Wallachia, was a real person. He was a 15th century eastern European warlord who fought the invasion of the Ottoman Turks with a reputation for bloodthirstiness and savagery that earned him a nickname that stuck (so to speak) – Vlad Tepes, or Vlad the Impaler.

Stoker borrowed Vlad from history and made him the model for his fictional creation, Count Dracula.

In Stoker’s novel – which was utterly terrifying to Victorian sensibilities that were considerably less jaded than ours today – the Count left his castle in Transylvania and relocated to England. He apparently thought it would be a more suitable location from which to launch his World Domination Project by infiltrating British society and spreading the vampire curse over the world.

Luckily for the human race, Dracula was vanquished, staked by Dr. Van Helsing and his team of fearless vampire hunters. Dracula and all his vampire progeny were all promptly turned to dust, and the warm-blooded lived happily ever after.

Now flip that scenario and picture this instead:  Contrary to Stoker’s novel (and pretty much every Dracula movie), not only was the Count not defeated… but in fact, he succeeded brilliantly and found a way to take control of the British throne. 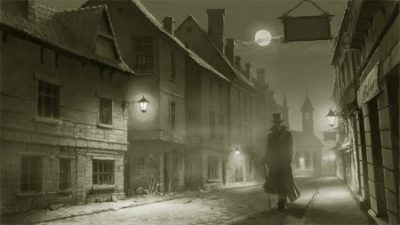 So imagine if you will…

The setting is London in 1888, with the British Empire at its height… the veritable center of the world where powerful political and cultural figures crossed paths. The stomping grounds of real historical figures like Queen Victoria, Bram Stoker, and Oscar Wilde, as well as imaginary ones like Sherlock Holmes and Lord Ruthven.

Like Stoker’s fictional count, Hunter’s Count Dracula has also had a change of address and has a similar diabolical scheme to infiltrate British society. Vlad has big plans, bent on conquest. He has set his sights on power once again, but this time he wants to rule the British Empire and eventually the world.

But unlike the happy endings of Stoker’s novel and all those movies where good conquers evil, this time the Count is victorious. 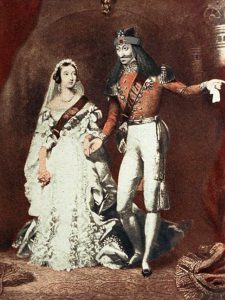 Upon his arrival in England, Vlad had set his plan in motion. He wasted no time simply lurking about Carfax Abbey, but started immediately creating new vampires of his bloodline – his “children” – and eventually seducing and turning Queen Victoria herself. He makes her his wife and becomes Prince Consort. But as the Queen is more or less his slave, he is effectively King of England.

Because it’s so hard to find good help, Vlad also brought along his own staff from the Old Country, a posse of savage medieval vampires who ruthlessly and sadistically enforce his rule.

As the novel begins, Dracula’s plan is succeeding beautifully. Vampires are multiplying in England; in fact, they’re taking over at all levels of society. Becoming a vampire is now a fashionable lifestyle choice. For the upper classes, it’s a strategy to gain social status and political power. But even the lowest classes are embracing the Dark Kiss hoping to escape disease and death. Both high-born and low-born are increasingly abandoning their “warm” lives for immortality, such as it is.

Those who haven’t embraced the new order are banished from the realm, locked away in prison camps, or simply murdered outright. At the very least, those who are too outspoken in their resistance have found themselves unwelcome in social gatherings and publicly shunned. 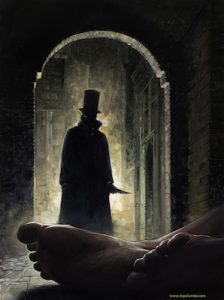 Meanwhile, in the grim back alleys of Whitechapel, young vampire prostitutes are being selectively butchered by a stealthy killer, christened “Silver Knife.” But we, of course, all know him as iconic Victorian serial killer, Jack the Ripper.

It’s of utmost importance to the Prince Consort and his minions – vampire and “warm” alike – that Silver Knife be stopped. This includes the mysterious Diogenes Club (made famous by Sir Arthur Conan Doyle, commanded by Sherlock Holmes’ older, less attractive brother, Mycroft Holmes).

Yes, that’s right. The Holmes Brothers get cameos (though Sherlock has been shipped off to a prison camp), as do a host of other familiar Victorian characters from literature and from real life. For example, Dr. Moreau and Dr. Jekyll are teaming up to create unspeakable horrors in the lab, while a hideous vampire – Count Orlok from Nosferatu (1922) is the sadistic head jailer in the Tower of London.

There are far too many to mention, but fans of the genre and Victorian literature in general will enjoy the parade of dozens of real and fictional figures including Oscar Wilde, Prince Mamuwalde (AKA Blacula), Lord Ruthven, Lestat de Lioncourt (Anne Rice’s Vampire Chronicles), John (The Elephant Man) Merrick, Bill Sykes, Gilbert and Sullivan, Fu Manchu, and Rupert of Hentzau as they pass through the novel’s pages.

In fact, it’s a bit of an inside joke for fans of these genres, a game of sorts to catch the multitude of references. (Some readers have found this distracting, but I suggest you not worry about it while reading. The author has kindly included a set of annotations at the end where you can check the accuracy of your eagle-eye after you’ve finished reading the entire book.)

Anno Dracula’s heroes, however, are original creations of the author. Charles Beauregard, a handsome agent working for the mysterious Diogenes Club, does resemble pretty closely the “gentleman action hero” archetype often seen in Steampunk and Victorian detective fiction. Then there’s Genevieve Dieudonne, who is a formidable elder vampire despite having the permanent appearance of a teenager. She also wants to see Vlad brought down and eradicate his foul bloodline from the world.

Charles and Genevieve join forces to find Whitechapel vampire killer Jack the Ripper and put an end to his murder spree but also to end Dracula’s bloody reign. As they get closer to the Prince Consort, they find themselves increasingly drawn together… and in increasing danger. 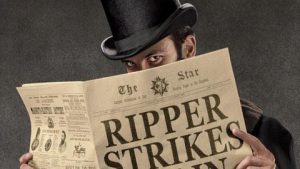 Hunter’s vivid descriptions of the characters, scenes, and settings really bring the novel to life. He describes his Victorian people and places in meticulous detail, from the halls of the elite, to the gaslit, murky fog-shrouded London streets, to the squalid hovels of the lower classes.

But it’s not all just fangs and fun… Hunter shines a light on hypocritical Victorian values by describing life in late 19th century London as it really was – a dangerous and violent time with gross inequality and social unrest, rampant disease, and filthy living conditions for a significant part of the population. Also, Hunter doesn’t forget about the political situation in Britain of that time. The novel contains numerous references to the tensions of the day between aristocrats and elites, socialists, republicans, and Fenians.

Anno Dracula as a fast-paced, fun, and entertaining thriller, and a loving homage to Gothic horror and Victorian detective fiction where real historical personalities rub elbows with fictional characters. 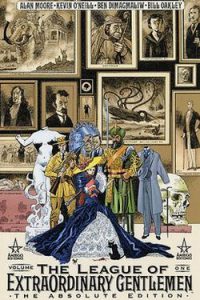 It may remind you a bit of Alan Moore’s League of Extraordinary Gentlemen for its Steampunk elements, Victorian scenario, and exciting action scenes (including kick-ass vampire women).

Or it may remind you of Charlaine Harris’s Sookie Stackhouse novels (HBO’s True Blood is based on them) where vampires are Out and Proud and integrated into society.

Whatever it is, Anno Dracula isn’t just a horror novel. And it isn’t your typical “whodunit” detective story – the Ripper’s identity becomes apparent quite early in the book. Think of it as an exploration of what Victorian England might have been like if Queen Victoria had decided to remarry and picked a vampire husband with designs on world domination.

Note: Anno Dracula was originally printed in 1992, but the newer 2011 edition includes nearly 100 pages of bonus material, including an alternative ending and some other writings by the author. 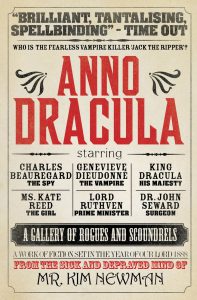