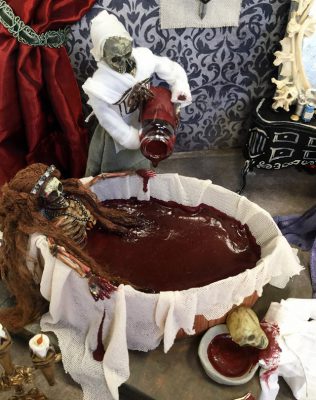 Countess Elizabeth Bathory, bathing in the blood of virgins

Not since the forensic crime scene models known as the Nutshell Studies of Unexplained Death (AKA Dollhouses of the Dead!) have there been such deranged dioramas. Like rooms in a dollhouse inhabited by history’s greatest weirdos and psychopaths, artist Lee Harper’s History Bones project brings some of the past’s most morbid stories to life in startling miniature detail.

From barber-surgeons and sin eaters to the strange love between Carl von Cosel and a stolen corpse, Harper digs up strange moments from history and meticulously crafts the dark scene with miniature human skeletons.

Read the entire lavishly illustrated article at Cult of Weird!