Sin Eaters: It’s a Dirty Job, But Someone’s Gotta Do It 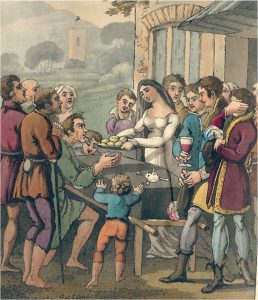 When a loved one died in parts of England, Scotland, or Wales in the 18th and 19th centuries, the family grieved, placed bread on the chest of the deceased, and called for a man to sit in front of the body. The family of the deceased watched as this man, the local professional sin eater, absorbed the sins of the departed’s soul.

The family who hired the sin eater believed that the bread literally soaked up their loved one’s sins; once it had been eaten, all the misdeeds were passed on to the hired hand. The sin eater’s own soul was heavy with the ill deeds of countless men and women from his village or town—he paid a high spiritual price for little worldly return. The coin he was given was worth a mere four English pence, the equivalent of a few U.S. dollars today. Usually, the only people who would dare risk their immortal souls during such a religious era were the very poor, whose desire for a little bread and drink outweighed such concerns.

Read the entire article about the world’s worst freelance gig at Atlas Obscura!