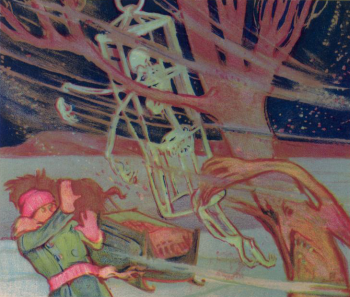 For centuries, the ghost of Marie-Josephte Corriveau has been haunting the cultural consciousness of Quebec, Canada. To many, the legend of “La Corriveau” is a ghost story, of a woman hanged for murder, her corpse put on display as a gruesome warning. But the story of La Corriveau and the gibbet in which she was hanged are based on real historical events, and after over a century away, the actual cage has made its way back home. As a result, Corriveau’s legacy has lately been shifting from folk tale to historical tragedy.

Marie-Josephte Corriveau was born in 1733, in what was at the time, a country called New France, which, by the time of her death, was controlled by the British. “The British forces were completely unorganized,” says Sylvie Toupin, a curator at Quebec’s Musée de la Civilisation, which currently holds Corriveau’s infamous gibbet. “There were many tensions because it was a new government, and the people weren’t happy with what was happening.” Ultimately, Corriveau would become a dire symbol of this frustration and disorganization.