The Devil’s Fruit (or Is It a Vegetable?) – Why People Have Feared Tomatoes for 600 Years 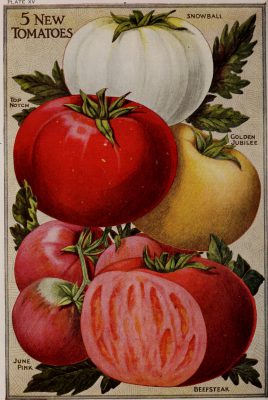 To find the reason why, you have to go back to the 1500s, when the humble fruit first reached European shores (and it is a fruit, by scientific consensus). Through no fault of its own, the tomato stepped into the middle of a continent-wide witchcraft panic, and a scientific community in tumult.

Between 1300 and 1650, thousands of Europeans (mostly women) were executed for practicing witchcraft in a church-and-government-sanctioned mass hysteria academics call the “witch craze.” As many as half a million women were burned, drowned, hanged, and crushed after trials in both secular and religious courts and lynched by vigilante mobs.

At the time of the tomato’s importation around 1540, diligent witch hunters were particularly interested in discerning the makeup of flying ointment—the goo witches smeared on their broomsticks (or on themselves, pre-broomstick). This potent magical gunk did more than enable airborne meetings with the devil; it could also transform the witch—or her unwilling dupe—into a werewolf, as described in case studies by prolific witch-hunter Henry Boguet, who noted that witches particularly enjoyed becoming werewolves in order to attack the left sides of small children and to stalk through cursed and withering cropland.