Walpurgis Night: How a British Lady went from Catholic Saint to Germanic Goddess to Witch and Gave Us a Second Halloween 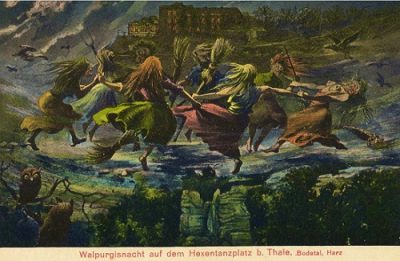 Walpurgis Night was when, according to the belief of millions of people, the devil was abroad – when the graves were opened and the dead came forth and walked. When all evil things of the earth and air and water held revel.” – Bram Stoker, Dracula’s Guest

In the Germanic countries of central Europe, they celebrate what is essentially a second Halloween – Walpurgisnacht (Walpurgis Night) – exactly six months from All Hallow’s Eve or Samhain.

Many of the ancient cultures divided the year into just two seasons, summer and winter. The dividing lines between the two seasons were Beltane and Samhain, with Beltane being one of eight solar Sabbats in the pagan calendar, its date based upon the Sun.

In Britain, Wales, Scotland, and Ireland, Beltane often begins at sunset on April 30th and continues through May Day. Since the medieval era and beyond, it was believed that the veil between the world of the living and the dead is thinnest on both Halloween night and the night before Beltane.

As a result, not just the ghosts of the dead, but fairies, shapeshifters, and witches were at their most powerful and could more easily cross between the two worlds.

Click here to read the entire article at GothicHorrorStories.com!