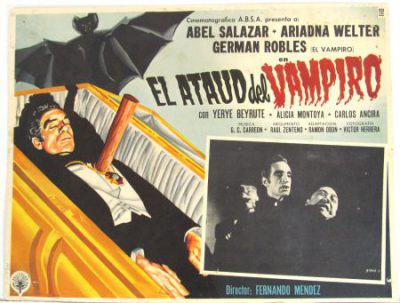 Horror movies have actually been around since the 19th century, all the way back to when George Melies made House of the Devil in 1896. European filmmakers dominated horror cinema in the early 20th century… but all that changed when Universal Studios launched their series of iconic horror films with the premiere of Dracula in 1931.

Compared to the Americans and Europeans, the Mexican film industry was a latecomer to the horror scene. Until the 1950s, Mexican movie houses were overwhelmingly dominated by melodramas and westerns. However, with its rich culture of fantasy tales and storytelling, it was inevitable that Mexico would get into the horror/fantasy game. The 1950s and early 60s were, in fact, the Golden Age of Mexican horror cinema. 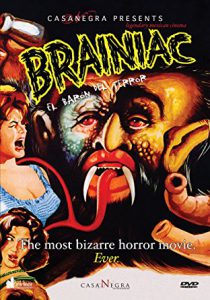 So how did the Mexican film industry get so into monster movies?

For one thing, the old Universal Studios monster films of the 1930s and 40s were experiencing somewhat of a revival in the 1950s. As televisions were becoming a fixture in just about every American home, TV programmers needed cheap movies to fill up late night and weekend programming on shows named with some variation on “Monster Chiller Horror Theatre.” Distributors started selling multiple cheapo movies together as package deals, and there was a tremendous demand for them.

Interest in the Universal monsters was also rekindled as England’s Hammer Studios began to revisit some of the same stories and themes in new, more provocative ways. Vampires got sexier, and the gore level was higher, extending the appeal of monster movies to a whole new audience.

The Mexican horror films coming out in the 1950s were obviously heavily influenced by the classic Universal canon but interpreted with a uniquely Mexican perspective. There were all the hallmarks of the Universal movies – moody, atmospheric cinematography, gloomy ambiance enhanced with chiaroscuro light and shadow and plenty of fog – with similar stories featuring mad scientists, vampire bats, and haunted mansions.  In fact, sometimes whole scenes or plot elements were stolen directly out of the Universal classics – always being careful to avoid getting too close and getting sued. 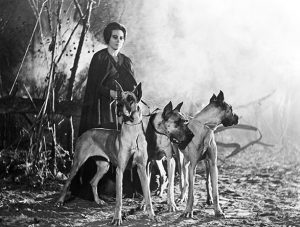 But instead of European castles and moors and the usual Hollywood tropes, Mexican filmmakers incorporated indigenous themes and characters from Mexican culture. Characters like the Aztec Mummy and La Llorona (the Crying Woman) were derived from local history and folklore, and the stories take place in uniquely Mexican settings where vampires, witches, mummies, and masked wrestlers skulk around haunted haciendas and Aztec pyramids. 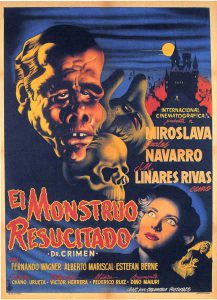 Early Mexican horror cinema was a bit experimental, taking successful tropes from American and European movies and then putting more of a hardcore spin on them.

For example, director Chano Urueta used footage of real surgeries in the first successful Mexican horror movie, El Monstruo Resuscitado (The Revived Monster, 1953), his version of the Frankenstein story. The reanimation theme is the same, but real surgical footage is used to amp up the gore factor – it’s no wonder the entire genre has been dubbed “Mexploitation.” The mad scientist themes of El Monstruo and La Bruja (The Witch, 1956) were so popular that the Western genre was soon taking second place to horror films at the Mexican box office.

Another successful Mexican mad scientist film was Ladron de Cadaveres (The Body Snatcher, 1956) in which a mad scientist transplants a gorilla’s brain into a wrestler’s body. Encouraged the movie’s success, director Fernando Mendez revolutionized the Mexican horror film genre a year later with… 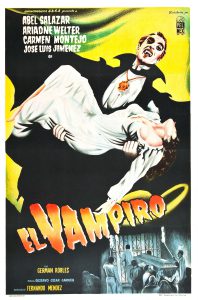 While Universal Studios was filming Dracula in 1931, they were simultaneously making the first Spanish-language horror film. They filmed a Spanish-language version of Dracula on the very same sets as the English-language version for release in Spanish-speaking countries. Spanish Dracula is actually considered by some critics to be a better film, but it didn’t inspire the same parade of sequels and similar titles.

It wasn’t until 26 years later that Mexican producer Abel Salazar had an idea – why not remake the vampire movie but with a Mexican theme (or as he pitched it to the studio, “Dracula on a Hacienda”)?

It was called simply El Vampiro, and it was a game changer.

Beautifully directed and photographed (though on a shoestring budget), El Vampiro was wildly successful in Mexico and in fact became a worldwide sensation. It made a star of German Robles, who portrayed the title character, and producer/co-star Salazar went on to become one of the most prominent figures in Mexican horror cinema.

There was no real precedent in Mexican cinematic or literary tradition for the vampire legend, and El Vampiro clearly borrows heavily from the Universal canon. Count Duval/Lavud is extremely similar to Count Dracula – a suave foreign aristocrat but with more personality and a bit of a sexy vibe.

This was no accident – the promotional posters for El Vampiro were rather risqué for the time. Vampire movie posters until then had been rather discreet and chaste, with nice little clean puncture wounds on the decently clad victims’ white throats (usually women!) and no fangs in sight. Beating Hammer to the punch by a year, El Vampiro’s posters emphasized the Count’s big shiny white fangs and didn’t spare the cleavage. This concept proved so successful that the artists applied the same approach to posters for the Mexican release of Bela Lugosi’s (completely vampire-free) Ed Wood epic, Bride of the Monster (1957).

Cashing in on his triumph with El Vampiro, Mendez followed up with two more classics: El Ataud del Vampiro (The Vampire’s Coffin, 1957), and Misterios de Ultratumba (The Black Pit of Dr. M, 1958). 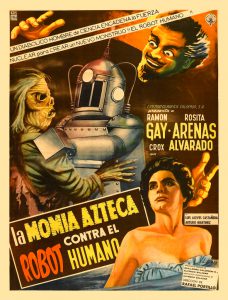 Hot on the fangs of El Vampiro came The Aztec Mummy (1957) – a new uniquely Mexican monster. A new character who, like Count Lavud, became an icon of Mexican monsterdom and influenced future generations of horror films.

Count Lavud, despite his residence in Mexico, was basically a Transylvanian immigrant, whereas the Aztec Mummy was a real homegrown Mexican cultural hero. He has a different look, as Aztec warriors were mummified through natural desiccation, not “cured” in the Egyptian method. He’s got some crazy hair and weird eyes, and he doesn’t have the bandages or the leg-dragging gait of his Old World counterpart.

The Aztec Mummy appeared in four films where he fights an evil robot, a mad scientist, and wrestlers of both genders in defense of the Aztec treasure he is bound to guard. 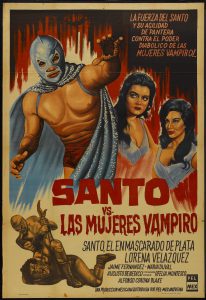 Mexican Horror Cinema’s most unique concept can be attributed to the inclusion of one particular cultural element that no one else has ever matched… Masked wrestlers, also known as los luchadores.

The popularity of movies about monster-fighting masked wrestlers is due in part again to the increasing availability of home TV in Mexico, which helped make lucha libre (pro wrestling) a national pastime. With larger-than-life costumed characters, clearly defined heroes and villains, and impossible feats of strength (all played totally straight), the sport lent itself well to big-screen adaptations.

But these weren’t just ordinary wrestlers. Besides having secret identities concealed by masks, they were practically superheroes… fighting crime by day, performing perfectly executed suplexes by night. So monsters and supernatural storylines were a perfect fit for these mass-produced wrestling movies.

The Undisputed Champion, of course, of all luchadores was El Santo (aka Rodolfo Guzman Huerta). El Santo was a genuine folk hero – just imagine a combination of Hulk Hogan, Superman… and Kolchak the Night Stalker. His funeral in 1984 was one of the biggest in Mexico City’s history. 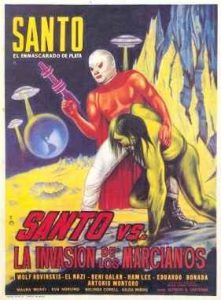 Santo and his pals (including Blue Demon, Mil Mascaras, and many others) battled all kinds of otherworldly foes, including vampires, zombies, witches, mummies, space aliens, and werewolves, all in their spare time – while never missing a regularly scheduled bout at the Arena Mexico.

In the decade after El Vampiro, over 20% of Mexico’s total film output was in the genres of horror, fantasy, or lucha libre, and audiences around the world couldn’t get enough of its unique style. Though production values aren’t always up to par (or, face it, really awful), you have to give the filmmakers props for making fun and eminently watchable horror movies.

But in addition to those dozens of wonderfully watchable movies, the Golden Age of Mexican horror cinema left an even greater legacy – a new generation of filmmakers who grew up fascinated by battling masked wrestlers, scheming witches, and menacing Mexi-Vampires.

One of those little kids sitting in front of the TV set was lifelong horror fan and beloved director Guillermo del Toro, who made history this year by winning the 2017 Academy Awards for Best Picture and Best Director for The Shape of Water. 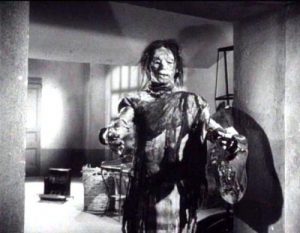 If you’re not yet initiated into the guilty (and not so guilty) pleasures of Classic Mexican Horror Cinema, allow me to suggest these Mexploitation titles:

El Baron del Terror (The Brainiac), 1961 – This ‘brain-eating reincarnation romp’ is one of my favorite movies EVER.