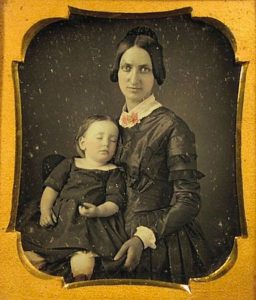 Lately, it seems like people are recording every moment of their lives – no matter how trivial – with photography. Digital technology and cell phone cameras have made taking pictures easier and cheaper than ever before, and social media provides a free platform to share them. Some people can’t even have a meal without posting photos of it online.

Now imagine living in a time when photography was a rare and expensive indulgence. A time when getting your picture taken was an event, something that may have only happened a few times in your lifetime… if at all.

Up until the early 20th century, it wasn’t uncommon for people to live their entire lives without ever being photographed. This was especially true for children, who often didn’t live long enough to have their physical image captured on film. 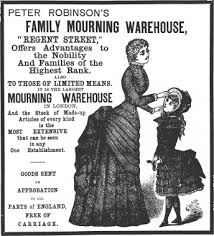 Death was more of a presence in everyday life for people in the 19th century. Before the advent of modern medicine, childbirth was dangerous for both mother and baby, and perinatal death was a common occurrence.

Even if a baby was fortunate enough to survive its birth, the Victorian nursery was still plagued with childhood illnesses that frequently were fatal. Babies and young children died in droves from infectious diseases that now have been tamed by vaccines or can be controlled by antibiotics. Child mortality rates ran as high as 20 to 30% in the mid 19th century.

But it wasn’t just the little ones who were at risk. Poor sanitation and malnutrition helped fuel deadly epidemics, especially in the crowded, polluted cities of the Victorian era. Prior to the development of antibiotics, it wasn’t uncommon for diphtheria, cholera, influenza, or typhoid fever to carry away multiple family members in a matter of days. 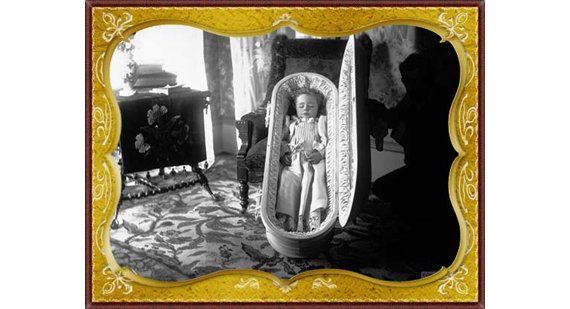 Victorian funerary customs were quite different from modern practices. Death care was also much more of a DIY thing in those days. End-of-life care and rituals were handled at home by loved ones rather than third parties like hospitals and funeral homes. Usually the person died in their own bed. Then the body would be cleaned and dressed by the family, to lie in repose in the front parlor of the family home before being laid to rest in the local cemetery. 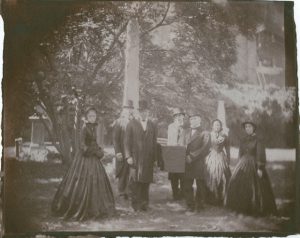 Often the bereaved family and friends would keep some kind of remembrance of their departed loved one. These were called “Memento Mori” – literally “remember, you will die.” Locks of hair, often made into jewelry, were popular keepsakes of the deceased. Some had death masks made of wax or plaster. It was especially popular to have a memorial painting or photograph created, often incorporating symbols of death and mourning.

The memorial, or postmortem, photograph has been around nearly as long as photography itself (1839), with the first known image of a dead person found on a daguerreotype from 1841. Photography was an expensive luxury, but not nearly as expensive as the only other way they had back then to keep someone’s likeness – having a portrait painted. 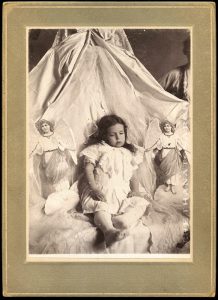 In images that are heartbreaking and strangely poignant, an infant who appears to be sleeping cradles a doll… a consumptive 20-something girl elegantly reclines… or a family gathers in a portrait, the last one to include a lost family member.

Again, in the days before photography was widely available or affordable, many people had no photographic record that they ever existed, especially if their lives were cut short. And it was probably better to have a portrait of that person dead than to have nothing at all. 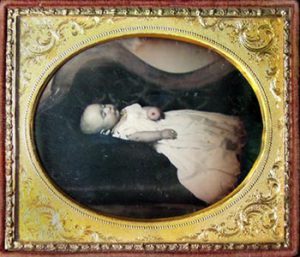 The composition and appearance of postmortem photographs changed over time, though many images from that era share similar poses and details. The photos tried to depict death as if it had just happened. The images are usually focused on the face and head or the full body of the deceased, arranged in such a way as to depict the subject as simply in a deep sleep – not denying the reality of death, but perhaps an attempt to portray the subject as “at peace.”

The deceased were often placed reclining on a bed, couch, crib, or baby buggy, dressed in their best clothes, and sometimes posed with a favorite toy. They were also often posed with other family members, especially the mother. Flowers, angels, and other symbols of mourning were also common props. 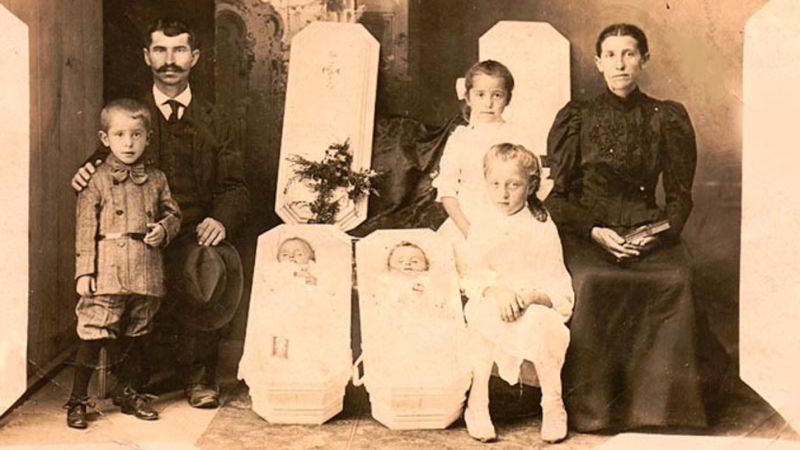 Another favorite postmortem composition was to show the deceased child or adult in their coffin, surrounded by the accoutrements of mourning.

Many 20th century postmortem photos show the subject in their coffin on the steps of the church or elsewhere, accompanied by the family and other mourners. This was especially common in Eastern European religious traditions. 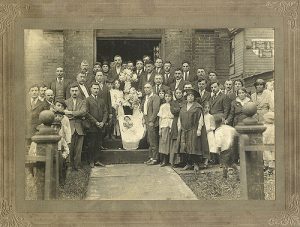 By the early 20th century, photography had become easier and more affordable. As people began to have their own cameras in their homes, it was no longer necessary to pay to have photos professionally done. And as improved sanitation and medical advances greatly reduced child mortality, photo sessions with the dead were no longer as necessary, and over time, the practice of memorial photography faded into obscurity.

If you’re interested in collecting or viewing Victorian postmortem portraits, check out ebay or Etsy. But be aware that a good number of the photos you will see are frauds. Because there’s a huge market on the internet for these photos, fakes are everywhere… whether they’re mistakenly designated as postmortem or dishonestly mislabeled for profit.

It can be difficult to tell whether the subject in the photograph is indeed dead, or just happened to be awkwardly positioned, caught making a weird facial expression… or simply wasn’t particularly photogenic. This is sometimes mistaken for a postmortem photo session. 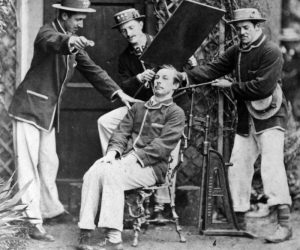 There’s also a common myth that that photographers used metal posing stands to hold the dead in a standing position for photographs.

Actually, the stands were only used for living people to get them to stand still long enough for the exposure. If you see a subject posed using an iron stand (also called a Brady stand), you can be pretty sure the person is alive. The longer exposure times needed in those days were not a problem when your subject could no longer move!

You can also sometimes tell a real postmortem from a portrait of someone who just happens to be asleep from the context. As mentioned above, if the subject is dressed in their Sunday best, surrounded by flowers, angels, or sad-looking family members, it’s a good bet that you’re looking at a memorial photo.

Postmortem photography is rare today. Sensibilities about death have changed, and people generally prefer to remember their loved ones as they were in life, especially as we now have such an abundance of photos of our everyday lives. 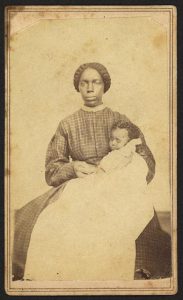 Still, the fascination with these memorial photos of people who are long dead persists.

They remind us that life was even more precarious and fragile back then – especially for children – and that there was certainly some degree of comfort in having a permanent likeness of a beloved child or family member to hang onto.

Perhaps we’re drawn to them because they offer a unique perspective on how the Victorians perceived death and how different it is from our modern ways. Or maybe it’s simply the way the images tug at our heartstrings.