Love and Monsters: Romantic Horror Films for You and Your Valentine 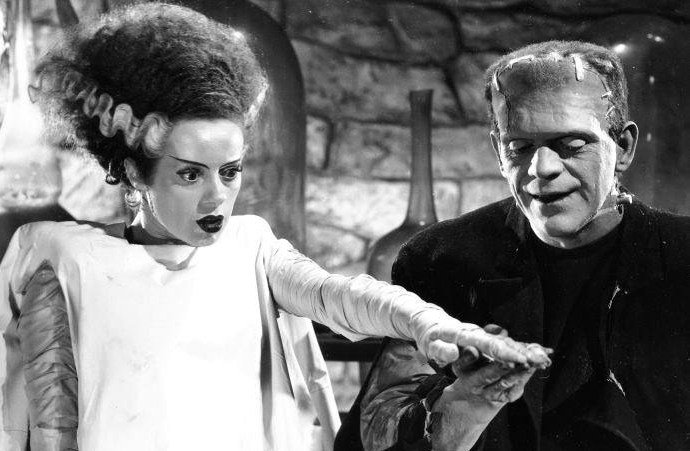 Dude, she’s just not into you

After my screed last week about how Halloween is so much better than Valentine’ Day, you may be thinking, “Mal, we don’t want to watch The Notebook or You’ve Got Mail or any of those sappy Valentine movies that normal couples like. Isn’t there something in the horror genre that’s suitable for this romantic occasion?”

Well, I would hate to disappoint. Here’s a selection of some of my favorite horror films that should set a romantic mood and maybe bring a few chills – hopefully both kinds – for your Valentine’s Day viewing! 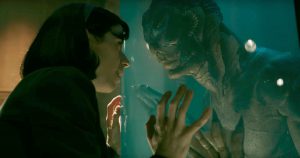 The Shape of Water (2017) – I reviewed this film a couple weeks ago, but it bears repeating – I think Guillermo del Toro’s interspecies romance is his greatest masterpiece. Though the lovers never exchange a spoken word, their bond and their passion are incredibly moving. Breathtaking performances from Sally Hawkins, Octavia Spencer, and Richard Jenkins (and of course, Doug Jones as the Creature) will sweep you off your feet. The Shape of Water is a Cold War-era fantasy that will get you right in the feels. See it with your favorite monster! 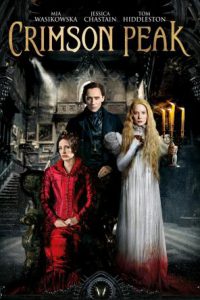 Crimson Peak (2015) –Another great Valentine movie from del Toro – this time it’s the very definition of Gothic romance. When the heir to a decaying ancient manor brings home his new bride, she soon finds (as such brides always do) that there are deep dark secrets lurking in every corner. The black and crimson color palette and somber mood create a dream-like visually lush and sensual atmosphere. Ghosts are all about, but not all the secrets are supernatural! And did I mention that Tom Hiddleston is terribly easy on the eyes? 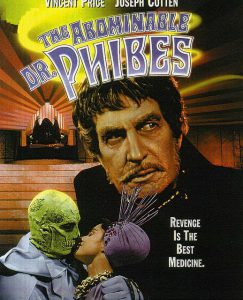 The Abominable Dr. Phibes (1971) – A classic! One by one, the ghoulish Dr. Anton Phibes picks off the members of the negligent medical team responsible for his wife’s death. The divine Vincent Price hams it up (of course he does) as Phibes, who dispatches his victims in tremendously creative ways based on the seven Biblical plagues. But in the end, he did it all for love… and revenge, of course. 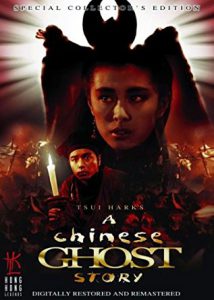 A Chinese Ghost Story (1987) – I love this movie – a blend of horror, romance, and action… and even a bit of comedy.  A young man is forced to spend the night in a temple, where he meets and falls in love with a beautiful ghost.  There’s plenty of swordplay and wirework flying as the hero joins forces with a retired swordsman to free the soul of his beloved. The effects are a bit dated, but the movie definitely holds up overall. 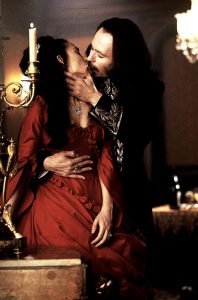 Bram Stoker’s Dracula (1992) – Francis Ford Coppola’s take on the Dracula legend is a reasonably faithful adaptation of Stoker’s original novel. It was one of the first films to connect the real Vlad III (aka Vlad the Impaler) of Wallachia, the 15th century nobleman and warlord who saved his people from the Turks, with the fictional Count Dracula. Apparently, it was the loss of his beloved wife Elisabeta (played by Winona Ryder!) that caused him to renounce his faith and turn to the dark side. Suitable for Valentine’s Day by virtue of some lovely romantic scenes between Vlad and Elisabeta, not to mention the very erotic part where the Brides of Dracula have their way with Keanu Reeves. 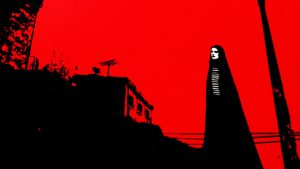 A Girl Walks Home Alone at Night (2014) – (aka “The first Iranian Vampire Western”) Here’s something new and different – a movie about an Iranian vampire, filmed in black and white in the style of a spaghetti Western. Despite it being a vampire story, it depends more on atmosphere than buckets of blood for its scares. “The Girl” is a lonely vampire who preys upon men who abuse women. Then one day she meets and falls in love with a young man caught up in a life of drugs and crime. The unique and dreamlike setting, an industrial hellscape, is actually southern California subbing for Iran. 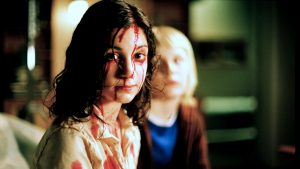 Let the Right One In (2008) – In this wonderful Swedish film, Oskar and Eli are in love. The only problem is that he’s 12, and she’s a 300-year-old child vampire. Perhaps a little offbeat for a romantic evening, but Oskar and Eli are devoted to each other with a pure innocent love that unfortunately is wrong in so many ways.  I reviewed it as part of my 31 Fright Nights Marathon blog in 2017. 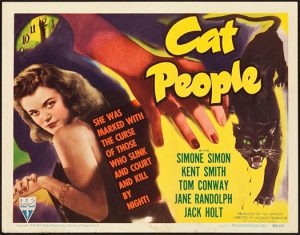 Cat People (1942) – Not going for overt scares, Val Lewton created a film where the horror is purely psychological, arising from fear and tension rather than blatant violence or gore. A young American man marries an Eastern European immigrant who she fears she may carry the curse of her people – turning into a killer panther at… shall we say, inopportune times? Anyway, perhaps someday we’ll find out why most monsters come from eastern Europe. 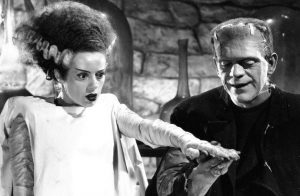 Bride of Frankenstein (1935) – Probably the best of the Universal Frankenstein films, and the only one where the Monster is actively seeking the love of a good (or at least well-put-together) woman. The monster’s innocent longing for a companion, a mate like himself, is sad and touching, especially when his love turns out to be unrequited. Yet Frank and his Bride are an eternal symbol of people who are “made for each other.”

And if you’re wondering why I didn’t mention Twilight… you’re reading the wrong blog.