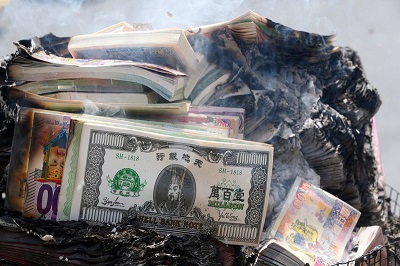 Burning “Hell money” so ghosts can spend it in the afterlife

There’s a pretty clear, well-defined set of traits that make up a ghost in the Western world—from the mushy green slimers of Ghostbusters to translucent, pudgy Casper to the myriad diaphanous denizens of Harry Potter’s Hogwarts. They’re immaterial, legless floaters that often care little for the material concerns of the living. It’s mostly a reflection of the Western conception of the afterlife, as place above (or below) the living world. But ghosts in other parts of the world can be rather different. In China, for example, ghosts experience the same desires and, quite literally, appetites of the living. And it’s in our best interests to give them what they want.

China’s annual Hungry Ghost festival sees to it that the ghosts of their ancestors get all the food, money, and iPhones they need… or paper facsimiles of the same. Which is okay, because the ghosts don’t care. Click here to read the entire article at Atlas Obscura.