The Ghosts of Christmas Past: How Ghost Stories Became a Part of Holiday Lore 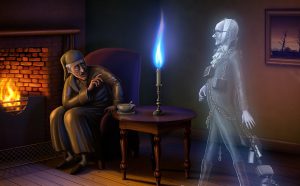 Scrooge is visited by Marley’s Ghost in A Christmas Carol

The notion that cold, snowy days are the best for stories designed to frighten and appall us goes back at least to the early 17th century. In Shakespeare’s The Winter’s Tale, written in 1611, Mamillius says:

“A sad tale’s best for winter. I have one / of sprites and goblins.”

But it was in the Victorian era that telling ghost stories became an indispensable custom of the Christmas season – indeed, the genre’s popularity had been dwindling somewhat until writers such as Willkie Collins and Elizabeth Gaskell breathed new life into it. Families relished the chance to gather around the hearth on Christmas Eve to try to scare one another half to death with tales of mysterious, menacing apparitions or, in one story by MR James, a master of the genre, a “vengeful ghost boy… with fearfully long nails.”

The practice even finds its way into Christmas songs. A verse in “It’s the Most Wonderful Time of the Year” mentions “scary ghost stories” right alongside singing to neighbors and hanging mistletoe as the very substance of the season.

Click here to read the entire article at The Independent