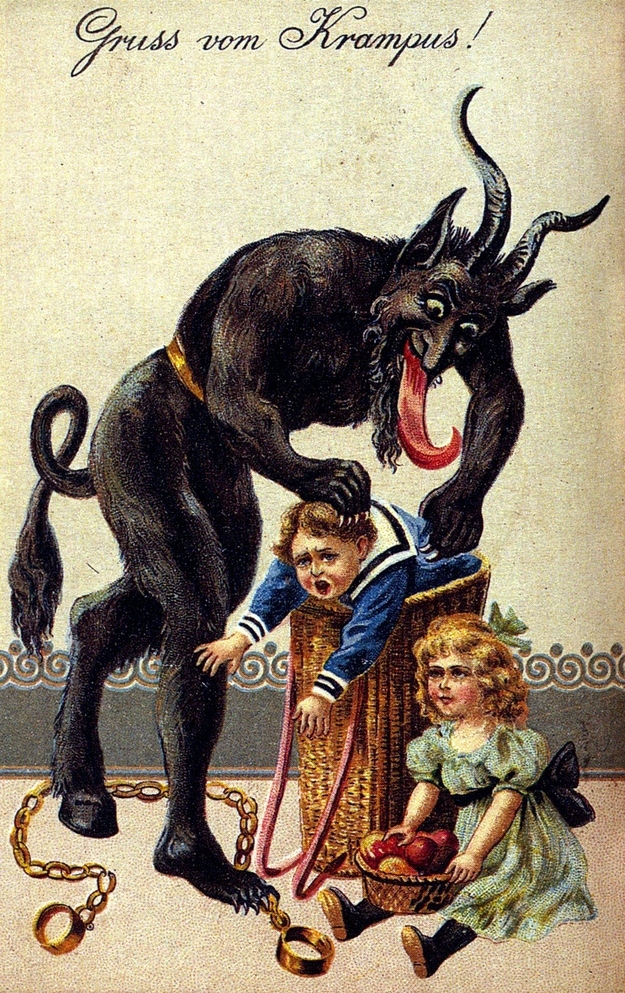 If you’re like most Americans, right now you’re asking “What? Who’s Krampus?”

Krampus has been a thing in Europe for centuries, but he’s just recently been catching on in the States. If you’re not familiar with Krampus, think of him as Santa’s Evil Twin. Forget about “The Night Before Christmas” and jolly old elves and such… for the children of Central Europe, the yearly visit from St. Nick and Krampus was more like Judgment Day for little kids. 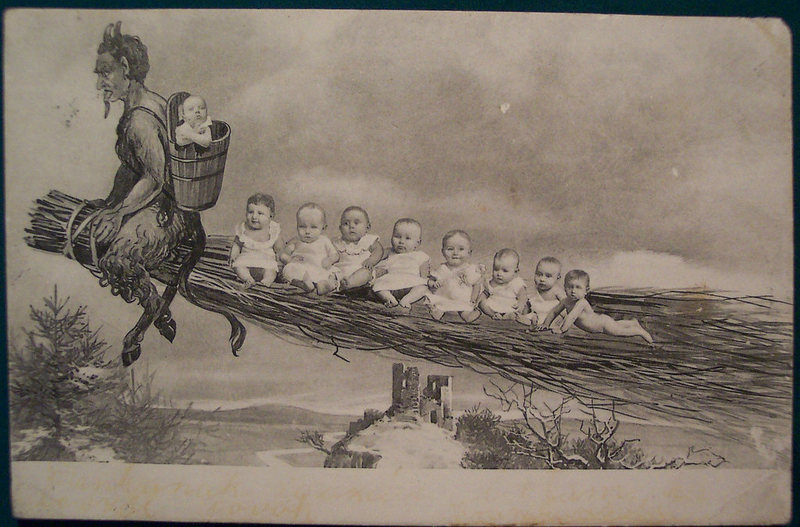 Anyway, Krampus has been around for a long time as a part of the pagan tradition, long before the Christian era. 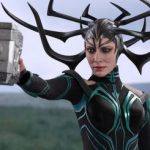 His name comes from the Old High German word “Krampho,” meaning “claw.” In pre-Christian folklore, Krampus was the son of Hel/Hela (goddess of the underworld, daughter of Loki) in Norse Mythology, who herself is enjoying a bump in name recognition from the movie Thor: Ragnarok.  (Though I can see some resemblance around the horns, in the looks department, Krampus must take after his Dad.)

Krampus looks sort of like the typical depiction of the Christian Devil.  He’s half goat, half demon. He has one cloven hoof and one human foot, goat-like horns, and an extremely long pointy tongue. 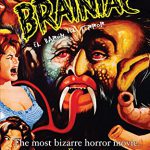 I think he’s also related to The Brainiac! I wonder if Krampus has a Mexican half-brother…

Though he was banned by the Catholic Church in the 12th century (presumably because of his demonic appearance), he was eventually assimilated into the Christian tradition as a devil-like figure in around the 17th century.

So how did the pagan figure of Krampus get mixed up with St. Nicholas and Christmas? 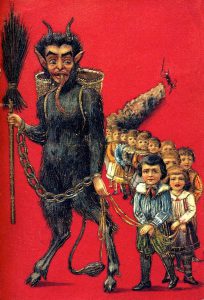 Remember that before the 20th century, Christmas wasn’t quite the materialistic kid-focused holiday that is today. It was more about drinking and dancing and revelry – definitely more an adult-oriented celebration.

Like Halloween, it was believed that the days around the winter solstice and yuletide were a time when the veil between the world of the living and the world of the dead became more transparent. It was common around Christmastime to tell stories of ghosts, witches, and other supernatural beings (for example, Dickens’ A Christmas Carol). 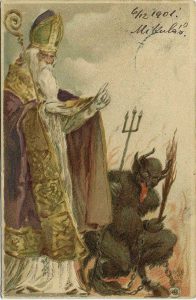 For example, in the European tradition, St. Nick appears in his ceremonial robes from when he was the fourth-century bishop of Myra (in what is now present-day Turkey).  And unlike the American Santa who prefers to work alone (except for a few reindeer), Euro St. Nick has a number of companions based on regional traditions who travel with him. Each of them has a part to play in rewarding or punishing deserving children.

Some of his other companions are Knecht Ruprecht in Germany, Zwarter Piet in the Netherlands, and Schmutzli in Switzerland. There is even Frau Holle, a remnant of pagan goddess belief.  Some are benevolent and kind; the others, not so much. But none are quite such a mirror image of Santa Claus as our boy Krampus.

Basically, St. Nicholas and Krampus are the “Good Cop/Bad Cop” of the Christmas season. 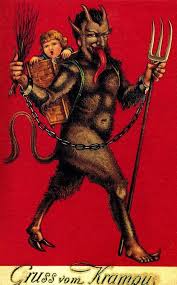 Sometimes Krampus appears with St. Nick; sometimes he travels on his own.  St. Nick focuses on the good children who have been nice and rewards them with sweets  – the naughty kids he leaves to Krampus, who gives them lumps of coal and beats them with birch sticks. But the really wicked children get much worse. They get stuffed in Krampus’s sack, and depending on who’s telling the story, get kidnapped, drowned, eaten, or just taken directly to Hell. (It’s believed these tales were inspired by Moorish raids on European towns where the locals were kidnapped and sold into slavery.)

Krampus has actually been banned at various times throughout history – he was even denounced by European fascists in the World War II era as anti-Christian and a tool of the Social Democrats. But overall for the last century or so, he’s enjoyed quite a surge in popularity. 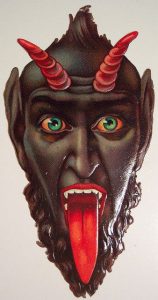 Because Krampus was a rural village tradition, the urban postcard printers now were able to sell cards with his image… but they didn’t really know what he looked like. Different regions had their own versions of Krampus, so there was no one agreed-upon image. So they used their imaginations, and based on his scary reputation, they borrowed traditional descriptions of the Devil from Christian sources.

Also, classical mythology was a big deal in the 1890s, especially the late 19th century fascination with fauns and satyrs and the like, particularly Pan, the half-man/half-goat mythological figure.

The postcards featured scary Krampus illustrations with sayings like “Gruss vom Krampus!” (Greetings From Krampus!) or “Brav Sein!” (Be Good!). He was typically shown beating or menacing children, who were usually screaming or crying (wouldn’t you be screaming if a demon was whipping you with tree branches?), and often stuffing them into his sack. 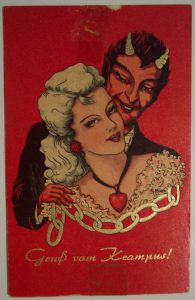 Older representations feature a more terrifying Krampus, but as Krampus cards for adults became more popular, they were meant to be funny more so than scary. In fact, Krampus turned out to be quite the ladies’ man, as he appears on many cards chasing after good-looking Frauleins.

The Feast of St. Nicholas is celebrated on December 6, the day that children wake up to receive their reward or punishment for being naughty or nice.

But the night before that, December 5 – Krampusnacht (or Krampus Night) – belongs to Krampus.

On that night, villagers dress up in pelts and horns and chains to chase their fellow citizens through the streets.  This ritual is called Krampuslauf (aka The Running of the Krampuses), a holiday tradition that’s been observed for over 1500 years.

Because of his changing nature over the years, costumes for the Krampuslaufen are quite varied, including everything from traditional devils to goat monsters to bizarre creatures straight out of a Guillermo del Toro movie.

Throughout the centuries, the Krampus impersonators have been mostly drunken young men, but today there’s increasing gender equality, and women are also wearing goatskins and getting schnockered for Krampus. 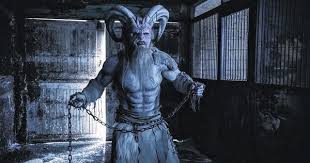 Krampus has clearly been hitting the gym

Krampus is definitely taking over pop culture. He’s on greeting cards and has his own parades in many cities in Europe and the US. He has appeared in numerous movies, including his very own feature film.  He has even appeared on The Colbert Report.  And there is such a thing as “Krampus – the Musical.” (No, really. There is. Look it up.)

Is the resurgence of Krampus in the 21st century essentially a backlash against the saccharine modern “family values,” kid-obsessed, commercialized, materialistic holiday celebrations? In a way, Krampus is the punk backlash to a Norman Rockwell Christmas, a rebellion against the commercialization and materialism, with a tip of the hat to revisiting pagan Yule celebrations. 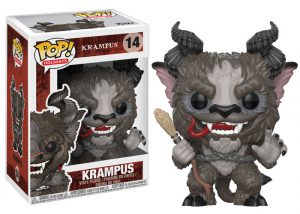 Will Krampus persist and become a standard holiday character like Rudolph the Red-Nosed Reindeer and The Elf-on-the-Shelf? I think he will – once you get your own Funko Pop figure, that’s when you know you’ve made it!

Want to read more about Krampus and the resurgence of Old World Pagan holiday traditions? Check out The Krampus and the Old, Dark Christmas: Roots and Rebirth of the Folkloric Devil by Al Ridenour.