Creepier Than Hollywood: The True Story of “Annabelle” the Haunted Doll 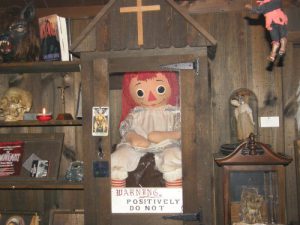 Here’s another spellbinding tale of the supernatural, as reported by our friends at Haunted Pittsburgh!

Try as they might, the Hollywood chillmeisters behind Annabelle: Creation (2017) can’t induce goosebumps as effectively as the true-life — and truly horrific — story of Annabelle, the Raggedy Ann Doll housed in the Warren Occult Museum in Monroe, Connecticut.

The story goes that in 1970, a woman bought the doll from an antique store for her daughter, who was in nursing school and who shared an apartment with another nursing student. The young women made a special pet of this doll, buying it clothes and jewelry for fun. But they soon discovered that all was not right with it. They would come home to find it in different positions and different locations. Then the doll began leaving notes for the girls reading “Help.”

The young women decided to contact a medium to get to the bottom of it. The medium performed a séance and then mistakenly concluded that the doll was possessed by the spirit of a young girl named Annabelle Higgins whose body was found in a field upon which their apartment complex was built. Supposedly, Annabelle told the medium that she liked living with the girls.

The women had a friend named Lou, who correctly perceived that there was something evil about the doll. He urged the women to get rid of it, which was not a good move by Lou. He was sleeping one night when the doll came for him. It tried to strangle him. After that, the doll lured Lou into a room alone and inflicted seven knife-like slashes to his chest.

Finally, the young women had enough. They contacted an Episcopal priest who prudently realized this case was above his pay-grade. 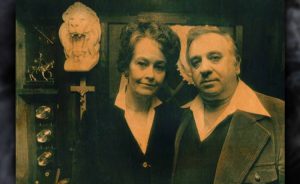 Ed and Lorraine Warren, the famous investigators from the Amityville Horror case, were brought in. Ed was a religious demonologist who worked closely with Catholic priests on cases involving possessions. In this case, the Warrens quickly concluded that it was worse than the women thought.

The doll was not actually possessed by a dead girl — only humans, not intangible objects, can be possessed. The doll was being manipulated by an inhuman demonic spirit looking for a human host.

A priest was brought in to perform a cleansing of the apartment, and the Warrens took the doll away for the safety of the young women. Toting the doll back to their house, the Warren’s car repeatedly stalled and swerved at dangerous curves, nearly causing multiple collisions. Finally, Ed Warren doused the doll with holy water and made the sign of the cross over it, which stopped the disturbances and allowed the Warrens to make it home. (I know, I know . . . you’re asking yourself why would anyone take that doll home? Remember, this is Ed and Lorraine Warren we’re talking about — not much scared them.)

At the Warrens’ house, the doll reverted to form and repeatedly levitated and inexplicably showed up in different rooms of the house, just as it had done at the nurses’ apartment. Frequently, the Warrens would find it sitting in Ed’s easy chair even though they had left it somewhere else in the house.

The Warrens had the doll blessed by a priest, and then they built a glass case for it and put it on display in the Warren Occult Museum in Monroe, Connecticut. On the display case is a note warning visitors not to touch it.

From the time the Warrens took the doll, Ed claimed that it was responsible for the near deaths of a homicide detective and a priest. The priest’s story is chilling. When visiting with the Warrens one day, the priest made the mistake of telling the doll that it couldn’t hurt anyone. As soon as he said it, Ed knew he might be in trouble. “That’s one thing you better not say,” Ed warned him. A few hours later, the priest was driving when his brakes failed as he entered a busy intersection. He survived, but it was close call.

Not so lucky was a young man who visited the Warren Museum and mockingly called for the doll to inflict scratches on him as it had done to others. Ed told the young man he had to leave. The young man and his girlfriend went outside and hopped on his motorcycle. They were making fun of the doll when the cycle slammed into a tree, killing the young man instantly.

On an appearance on “CBS This Morning” in the mid-90s, Ed held up the doll and told the host, Harry Smith, that it was the most dangerous object he had ever encountered.

The Warrens visited Pittsburgh in 1989, and their words won’t sit well with amateur ghost investigators. Ed Warren said: “Do not fool around with the occult, do not try to communicate with the dead. You might think you have reached a loved one, but it could be something else, something evil. If you want to communicate with spirits, the best way is through prayer.”