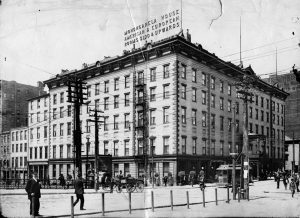 Please enjoy this intriguing guest article by our friends at Haunted Pittsburgh. Visit their website or Facebook page to find out what ghostly events they have planned for the winter months!

The Monongahela House, Pittsburgh’s grandest hotel and perhaps its most historic building, sat on Smithfield Street between Fort Pitt Boulevard and First Avenue. It was built in 1840, burned down in the Great Fire of 1845, was rebuilt in 1847, and closed once and for all in 1935.

The greatest luminaries of the day stayed there—Charles Dickens, Mark Twain, P.T. Barnum, Buffalo Bill, and the Prince of Wales before he became King Edward VII. Legendary inventor Nikola Tesla lived here during his stay in Pittsburgh working for Westinghouse. Eleven presidents stayed here, including Andrew Jackson and Teddy Roosevelt. The hotel’s most celebrated visitor was Abraham Lincoln, who stayed here February 13th to 14th 1861 on his way to his presidential inauguration.

A cavalcade of major actors who came to town also stayed there. Perhaps the most famous actor of his day, Edwin Booth—the brother of the man who would kill Lincoln in 1865—stayed there (but not while Lincoln was there). It was reported that after a performance one time, Mr. Booth was spotted walking along Smithfield Street, stopping at a confectionery store to buy cream puffs. Sounds much like our modern obsession with celebrity culture, doesn’t it?

On Lincoln’s visit to the hotel, he told 4,000 people gathered on Smithfield Street that since there weren’t yet any hostilities between North and South, they should—quote–“keep cool.” That “cool” lasted only two months until the Battle of Fort Sumter and the start of the Civil War.

But the Monongahela House is important not just because its guest list but because of what happened here. For starters, it was a way station on the Underground Railroad that helped runaway slaves escape to freedom. In the 40 years leading up to the Civil War, as many as 10,000 slaves reached freedom in Canada by way of Western Pennsylvania. When slave owners from the south would bring their slaves here, the free blacks who worked at the hotel would whisk the slaves away to places like John Vashon’s barbershop and bath house—it was located where the PPG Building stands today—and the ex-slaves would get a new hair style and wardrobe to help them elude capture on their way to freedom in Canada.

April 16th, 1847: A runaway slave named Daniel Lockhart was living as a free man in Pittsburgh when he’s met on the street by someone who hires him to take a trunk up to a room on the top floor of the hotel. It was a trap. When Daniel got there, he was met by his “owner,” a man named Joseph Logan, and two constables—they’d come up from Virginia to track him down—and they had a boat waiting at the wharf on the Mon to whisk him away.

Daniel screamed for help—but it wasn’t just a scream, it was a piercing cry for freedom that reverberated throughout the hotel and can still be heard today. The hotel’s staff sprung into action. Within minutes, they assembled a large crowd, and when Logan and the constables brought their hapless prisoner out the door on the way to the boat, the crowd rushed them—they knocked down one of the constables and struck the other. And the crowd—that wonderful crowd—grabbed Daniel and carried him off to safety–and to freedom.

Eight and a half years later, the noxious shadow of slavery still loomed over our land. In response to this evil, something monumental happened at the Monongahela House. At that time, opposition to slavery was widespread but fragmented. Astute abolitionists realized that a new political party was needed to prevent the spread of slavery into new U.S. territories.

On November 18, 1855, at the Monongahela House, David N. White, editor of the Pittsburgh Gazette—a predecessor of the Post-Gazette—met with Salmon P. Chase, who would become Lincoln’s secretary of the Treasury and later, Chief Justice of the U.S. Supreme Court. They agreed to call for a national convention to form a new organization of all who opposed slavery and its expansion.

The Monongahela House can truly be called the birthplace of the national Republican Party. That first Republican Party convention was held three months later, on February 22nd and 23rd, 1856, around the corner from this hotel—at Lafayette Hall on the corner of Wood Street and Fourth Avenue (the building is long gone—there’s a YWCA there now). The Republican Party was formally started, and the convention adopted as its first principle to “resist by every Constitutional means the existence of Slavery [in] any of the Territories of the United States.”

The party’s nominee for president, John C. Fremont, lost the election that year—but four years later, the party nominated a self-taught lawyer from Springfield, Illinois named Abraham Lincoln. Under Lincoln, slavery was eradicated from our soil—at a price in the bloodshed of our young men unprecedented in American history. The Republican Party did pretty well for itself. From Lincoln’s election until Woodrow Wilson’s, some 52 years later, the only Democrat to win election to the White House was Grover Cleveland. And it all started here in Pittsburgh.

Ah, but this wouldn’t be a Haunted Pittsburgh article without mentioning some of the strange things. We noted above that Lincoln stayed at the hotel in 1861. As the years went by, the room where he stayed came to be revered, and the hotel reserved it for only its most important guests. When the hotel was torn down, the furniture from the Lincoln room was displayed in a museum at Allegheny County’s South Park. That museum closed at some unknown time, and the county lost track of the whereabouts of the bed Lincoln slept in.

Then, in October 2006, the Pittsburgh Post-Gazette reported that the bed was found in a South Park maintenance shed that had a leaky roof. Supposedly, a worker climbed into the eaves and discovered a previously unknown alcove, filled with old furniture wrapped in burlap. There was the bed! It was considered by everyone to be an incalculable find.

Except that’s not what happened. The Allegheny County employee who “found” the bed had known where it was for years. Haunted Pittsburgh met with the man and his wife. The bed was in the upper loft of his carpenter’s shed at South Park, along with Christmas decorations that he stored there for his wife. The man had no idea that the bed was in any sense valuable, much less historic, so for years, Lincoln’s bed sat next to his wife’s wicker Christmas reindeer. One time, the man asked his wife if she wanted the bed, and she came out to look at it. She decided it was too big, but seriously considered taking it to sell on Ebay. Only after the man learned that people were looking for Lincoln’s bed did he realize what he had. The bed was trucked off to be displayed in the Heinz History Center.

We told the man and his wife they were lucky they didn’t take the bed. You see, this is not a bed you’d want to sleep in yourself.

Some things may be better left hidden under burlap in carpenter sheds.

The Monongahela House also had a ghost. “Old George” was a longtime, very faithful employee of the hotel. For thirty years, every morning at exactly at 4 am, “Old George” would glide through the grand corridor on the second floor to unlock the doors to the hotel’s dining room for breakfast. You could set your watch by “Old George”—nothing would stop him from opening those doors at precisely 4 a.m.

Alas, “Old George” passed away in 1894. But old habits die hard. Not long after he died, bellhops and waiters were absolutely terrified–some even threatened to quit–because up on the second floor, the apparition of “Old George” was seen gliding through the grand corridor. It passed right through the doors to the dining room–at precisely 4 a.m.

It’s nice, for a change, to tell a ghost story about a specter with a solid work ethic, as opposed to one who hangs around just to scare the bejeebers out of people.