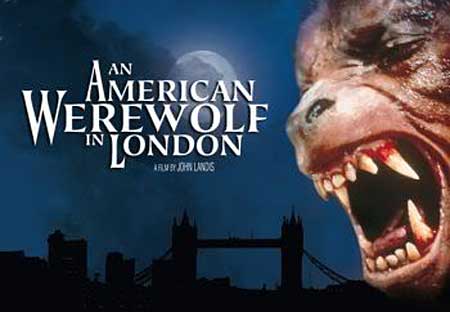 So it’s Night #27 of the 31 Fright Nights Challenge, and I haven’t done a werewolf movie yet.

There are too many choices!  Should I pick a classic like Werewolf of London (1935) or the original 1941 Universal film with Lon Chaney, Jr? How about the 2010 remake with Benicio Del Toro? Or maybe some true schlock like Werewolf (1987) or I Was a Teenage Werewolf (1957)?

In the end, I chose An American Werewolf in London, because I remembered it as an interesting modern-day werewolf story that represented the boom in werewolf movies in the early to mid 80s. Also, it was free on Amazon Prime, which pretty much clinched it.

Director John Landis had the idea for this film as a teenage production assistant. Later when he had made them zillions of dollars from Animal House (1978) and The Blues Brothers (1980), the studio owed him big time – which for a director means you get to make your “personal project” movie. 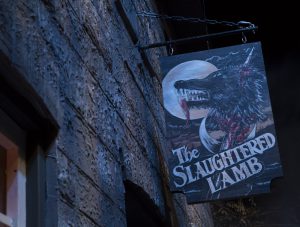 The story begins with two American college students, David (Naughton) and Jack (Griffin Dunne), backpacking in northern England, where in the movies it’s always cold, wet, and foggy. Looking to warm up and get some grub, they stop at the inauspiciously named The Slaughtered Lamb Pub, where the locals are just as cold and forbidding as the weather. They’re clearly not welcome, especially when they ask about the shrine with the pentagram and candles.

The guys decide it’s safer to take their chances in the stormy night. At least the villagers have the decency to remind them to stay on the roads and not wander onto the moors. 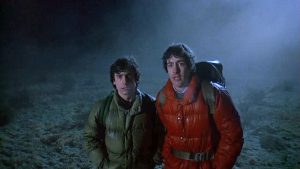 But of course they get disoriented in the rain and mist and do it anyway. The distant howl of a wolf makes them pick up their pace… but it’s getting closer. In an instant, the growling is close at hand, and they see a large animal stalking them.

Suddenly, a huge hairy beast leaps out of nowhere and tears Jack to pieces, then attacks David, biting and scratching him. But before it can finish David off, the folks from The Slaughtered Lamb come and blast the wolf into smithereens. As David loses consciousness, he sees next to him the corpse of a naked man, shot full of holes.

When he wakes up in a hospital, he finds out he’s been in a coma for three weeks and Jack is dead. He answers police questions and tells them how he and Jack were attacked by a huge animal, a wolf perhaps. Bollocks, says the inspector; the local police confirmed that they were attacked by an escaped lunatic. 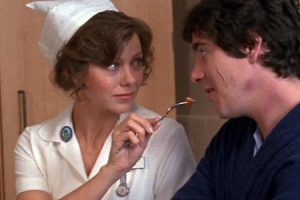 Cute nurse Alex (Jenny Agutter), takes an interest in David and does her best to help him. Meanwhile, David is having vivid dreams about running naked through a forest, seeing himself as a horrible beast. 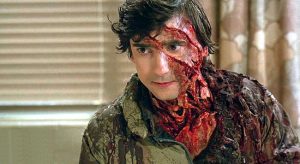 Jack’s bloody corpse appears in his dream to warn him – at the next full moon, he’ll turn into a werewolf like the one who attacked them.  The only way to end the curse is for David to kill himself.

When David is discharged, Alex takes him home with her, and exactly as you would expect, they end up in bed. Disappointingly, the sex scene is so dull and seems so endless, I actually wandered off to see if there was any more popcorn (there wasn’t). Unfortunately, they were still going at it when I came back.

Later, Jack’s rapidly decaying corpse is waiting for him in the loo. You have to kill yourself, Jack says, it’s the only way. Nonsense, says David, questioning his own sanity and still refusing to heed Jack’s message from beyond the grave. 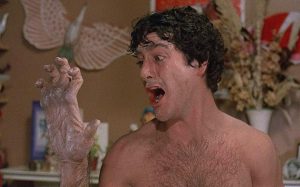 The next night while Alex is at work, David transforms and goes around London killing people. He wakes up the next morning naked in the wolf den at the zoo. By stealing a little boy’s balloons and a woman’s pretty red coat, he manages to get back to Alex’s flat without being arrested.

When he sees the newspaper headlines about the previous night’s murders, David realizes he was responsible. His attempts to make a scene and get arrested are funny, but British cops are pretty chill, and Londoners aren’t as sensitive as Americans about profanity. He wonders what one has to do to get arrested in this town (yelling/swearing at a cop and randomly offending the easily offended doesn’t work) and runs off. 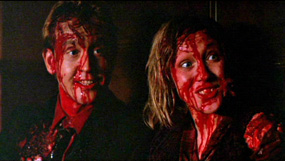 But look out! The moon is up, and David transforms into the werewolf again. He kills a whole bunch of people and escapes from the theater, then he kills some more people and causes a lot of traffic accidents.

Now the cops have David trapped in a blind alley, and Alex arrives and begs him to let her help him. A flash of recognition passes over his face – then he leaps at her and is gunned down by the police. The movie ends right there, no philosophizing, no nothing. He doesn’t even transform slowly back into a person; he’s instantly just a naked dead guy. Credits roll. 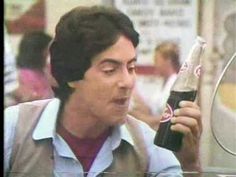 If David Naughton looks familiar, it may be because he was the singing/dancing Dr. Pepper Dude in the old “I’m a Pepper/You’re a Pepper” commercials. In fact, that’s where Landis saw him and decided to cast him in the film because they were both Peppers. Unfortunately, the company wasn’t happy about Naughton’s nude scenes in the movie and fired him.