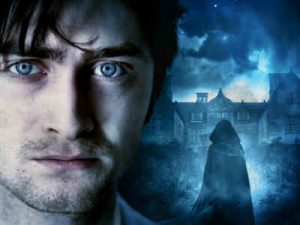 Tonight we watched The Woman in Black, or “Toto, we’re not in Hogwarts anymore.”

So am I the only one who struggles with the fact that Harry Potter has grown up?

Daniel Radcliffe first appeared on my radar as the title character in the Harry Potter films, an adorable moppet with a lightning bolt scar on his forehead.

From the Sorcerer’s Stone to the Deathly Hallows Part 2, Daniel and his co-stars aged from the cute pre-teen stage to late adolescence. But even after the last Horcrux had been found, they still looked like “kids.” Teenagers, but still kids.

Then the next thing you know, Daniel’s on Broadway in Equus, buck naked. Since then, he’s done a lot of respectable stage and film work, so I’m just going to have to get used to it.

The Woman in Black (a remake of a 1989 British TV movie) was Radcliffe’s first post-Harry Potter film.

As young solicitor Arthur Kipps, Radcliffe has a perfect face for Victorian/Edwardian Gothic. With his large expressive eyes and angular bone structure, he totally looks the part of a melancholy, sensitive Victorian soul. His entire countenance and body language simply radiate grief.

And there’s a good reason for that – Arthur’s wife died giving birth to their son, and he’s never quite gotten over it.  In modern times, his deep depression would be treated with medication and therapy, but people back then were expected to buck up and get on with their lives. (Before filming, Radcliffe even saw a psychiatrist so he could better understand his character’s depression.)

Unfortunately, Arthur’s moodiness and preoccupation are also affecting his work, and his boss is threatening to shitcan him if he doesn’t get his head on straight and pronto. Not a good situation for a single dad.

Much like poor Renfield in Bram Stoker’s Dracula, Arthur is dispatched to a remote backwater village to settle the estate of the late Mrs. Alice Drablow, eccentric owner of Eel Marsh House. But upon arriving in Cryphin Gifford, he gets a frosty reception from the hostile townspeople. Could it be that (like most small towns in horror films) they’re hiding a terrible secret?

Not everyone is so cranky – he is befriended by local landowner Sam Daily (Ciaran Hinds) and his wife Elisabeth, who is pretty damn eccentric herself… she has two little dogs that she dresses in people clothes, seats at the dinner table, and rocks in a cradle like babies. Like many of the other residents of Cryphin Gifford, Sam and Elisabeth also have lost their only child, a son, who drowned.

When Arthur arrives at Eel Marsh House to collect the estate papers, he finds (surprise, surprise!) he’s not alone there. There are spooky noises, locked door without keys, shadows that may or may not be ghostly children, and worst of all, the apparition of an otherworldly woman in mourning dress. He does a lot of roaming around the dark hallways and gloomy grounds, seeking the source of the mysterious phenomena.

While reviewing the papers, Arthur finds evidence of the connection between Mrs. Drablow, her young son who died in a carriage accident in the marsh, and the frightening Woman in Black.

Meanwhile, the local children continue to die horribly – every time someone sees the Woman in Black, another village child dies – and the very irritable townspeople blame Arthur for every one of them. Before long, Arthur figures out why the ghost is making the children commit suicide and why she will never forgive the wrongs that were done to her.

Arthur’s attempts to make things right with the ghost are the most powerful scenes in the film. His deep dive into the hideous black muck of the marsh to recover the body of a dead boy is suspenseful and downright bone-chilling. I dare you not to be totally creeped out when Sam and Arthur recover the sad little corpse from deep in the mud, then wraps the child in a shroud and places him on his bed, surrounding him with cheerful cards and an entire menagerie of creepy mechanical toys.

Will Arthur succeed in placating the vengeful ghost? Rather than spoil the ending, I’ll let you find out for yourself!

There’s no gore to speak of in The Woman in Black, but plenty of old-fashioned suspense and dread. It’s definitely going for psychological horror rather than cheap scares, though there are a few well-placed jump scares at appropriate points in the movie. What really establishes the mood of the film is the pervasive dark and melancholy tone in every scene.

Of course, it has its detractors. Occasionally it’s a bit slow to develop, and some may prefer a more contemporary kind of horror film.

But like other well-crafted films of its kind, the loving care devoted to the photography, art direction, and detail of The Woman in Black goes a long way in compensating for other sins. It’s vintage-style horror at its finest.