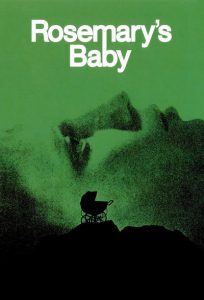 Rosemary’s Baby is often blamed for launching the wave of Demon Child movies that became a Hollywood staple for decades to come.

With the threat of nuclear apocalypse and the questioning of long-established religious norms, the time seemed ripe for a movie that addressed those fears… questioning the very existence of God and Satan, and rational thought vs the supernatural. The movie is careful to show that it takes place in this very specific time and place with Time Magazine’s “Is God Dead?” cover and mentioning the Pope’s first Western Hemisphere visit – Rosemary’s child is born in June 1966 (or “666”).

Obviously, it was the right time for Rosemary’s Baby, which was not just a massive hit, but critically acclaimed as well. Polanski’s script was nominated for Best Adapted Screenplay, and Ruth Gordon won the Academy Award for Best Supporting Actress. (In fact, Ms. Gordon’s Oscar was the first ever awarded for a horror film until Silence of the Lambs in 1991.)

Rosemary’s Baby was produced by beloved B-movie director, William Castle, who also happened to direct last night’s Fright Night feature, House on Haunted Hill. In an act of astonishing prescience, he bought the film rights to Ira Levin’s novel before it was even published. Finally (he must have thought), this would be his ticket to respectability, directing a big-budget horror film for grownups, one that he could be proud of.

But his reputation for making cinematic junk preceded him, and Paramount refused to allow him to direct, choosing Polanski instead.

Rosemary’s Baby not only inspired future movies about Devil Babies and Demonic Pregnancies; it also changed the way Hollywood looked at witches.

Most horror films take place in small towns and rural areas, but Rosemary’s Baby is set in Manhattan, a rare example of what is referred to as “urban horror.” Modern-day witches and monsters can hide among the tall buildings, massive crowds, and busy streets of a big city. The Satanists in Rosemary’s Baby aren’t easily identified crones and wizards – they’re ordinary-looking middle-aged to elderly apartment dwellers, perhaps a bit badly dressed, who blend in with the crowd. Chalk one up for “the banality of evil.”

Just about everyone knows the plot to Rosemary’s Baby, so I doubt I will be spoiling it for you, but I’ll give you a recap.

Despite warnings about the building’s sinister reputation for murder, black magic, and even cannibalism, a nice Catholic girl and her struggling actor husband move into the Bramford, a massive gothic Central Park West apartment building.

(I’m still trying to figure out how a newlywed couple – one of whom is a marginally employed actor – can afford a huge apartment in one of Manhattan’s landmark buildings. And how did they fill it up with furniture?) 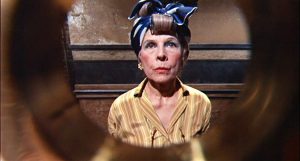 Anyway, Rosemary’s having fun redecorating her new home, except for one thing… Minnie and Roman Castevet, the eccentric old couple in the apartment next door.

They’re pushy, intrusive, and incapable of taking a hint. And what’s up with that weird singing and music coming from the other side of the wall? The Castevets get on her nerves, but to Rosemary’s dismay, Guy actually seems to enjoy hanging out with them.

When Guy gets a big Broadway role (at the expense of another actor), it looks like fame and fortune are on the horizon, and they decide it’s time to start the family that Rosemary wants so badly. Too bad the romantic pre-conception dinner that Rosemary planned is interrupted by Minnie delivering her special “chocolate mouse” dessert.

That night Rosemary has a terrifying dream about being raped by a monster.  Not long afterward, she’s delighted to find out she’s pregnant, but her dream of motherhood becomes more like a nightmare.

Where most pregnant women are radiant, Rosemary is in terrible pain, losing so much weight that she’s shockingly gaunt and unhealthy-looking (definitely not helped by the awful “mod” haircut).

Polanski does a brilliant job of getting us inside Rosemary’s head and showing us things from her perspective. We feel her anxiety about her constant pain and what that means for her baby’s well-being. With most of the action taking place within the shadowy claustrophobic halls of the Bramford, Rosemary is manipulated, isolated from her friends and support people and the outside world in general. She’s even having doubts about her husband. 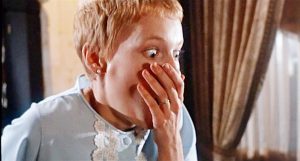 Eventually, she realizes that she’s not paranoid… they really ARE out to get her.

The controversial ending was pretty shocking for its time and left an opening a mile wide for future bad remakes and a couple of “Where Are They Now?” films about what happens to Little Andy down the road.

So what’s this about a Rosemary’s Baby Curse?

In case you haven’t heard about it, some say that Rosemary’s Baby – like Poltergeist (1982) – carried a curse that brought misery to everyone associated with it.

As far as I know, Mia Farrow seems to have escaped the curse unless you count being served by then-husband Frank Sinatra with divorce papers on the set…. or more likely, her 12-year relationship with Woody Allen.