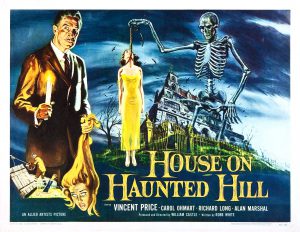 You knew I’d get around to a Vincent Price movie sometime this month, didn’t you? I’d hate to disappoint.

I was sure I had The Tingler (1959) and Witchfinder General AKA The Conqueror Worm) (1968) in my collection, but they were nowhere to be found. So I turned to my best friend, Amazon Prime Video, for a different Price vehicle; in fact, one of Vincent’s most interesting performances…  House on Haunted Hill (1959), directed by the “Often Imitated, Never Duplicated” William Castle.

I always say you can’t go wrong when you stick with the 3 C’s – Camp, Cult, and Castle. (Some more good C’s are Cushing, Caligari, and Caltiki, the Immortal Monster.)

If you’re not familiar with Castle’s work, he was the King of the Gimmick Movie back when they would do just about any crazy stunt to get butts in seats at the theater or cars at the drive-in.

Castle was the genius behind “Percepto” – wiring some theater seats to deliver a mild electric shock to those butts when The Tingler got loose. He also ran a promotion offering $1000 insurance policies for moviegoers who DIED OF FRIGHT!  (I don’t think this ever actually happened.) And he made headlines when he hired uniformed nurses to hang out in the lobby (with an ambulance parked out front) in case moviegoers fainted from fear. 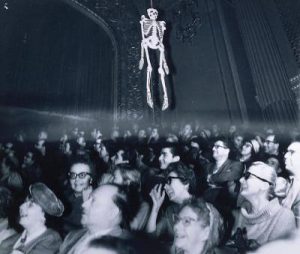 My favorite is the cool gimmick Castle dreamed up to promote House on Haunted Hill… ladies and gentlemen, feast your eyes on… “Emergo!” – basically a glowing plastic skeleton that would emerge from a black box next to the screen and fly around over the heads of the audience during the climactic acid pit scene.

There was one problem… when the local kids got wind of it, they brought their slingshots to the theater and bombarded the poor skeleton as it flew overhead with rocks, popcorn, BBs… whatever they had on hand. So Emergo was a great idea in theory, not so much in practice.

Castle was responsible for another neat gimmick that was introduced in the film’s opening moments. Before anything appeared on the screen, the soundtrack kicked in with hideous groans, diabolical laughter, and other assorted scary sounds. Today as we watch from the living room sofa, that’s not too intimidating, but for a more credulous theater audience in 1959, imagine you’re in total darkness, surrounded by high-volume shrieks and moans. I think it would have been a pretty creepy experience! In fact, it inspired the creation of “Sounds of the Haunted House” recordings that have been sold for Halloween parties ever since.

Anyway, here’s what the movie is actually about… an eccentric millionaire and his wife throw a haunted house party. He kicks it up a notch by actually renting a haunted house and offering five guests $10,000 (about $83,000 in 2017 money!) if they can spend the night and survive. How eccentric is this guy? He actually gives his guests miniature coffins containing loaded guns as party favors! 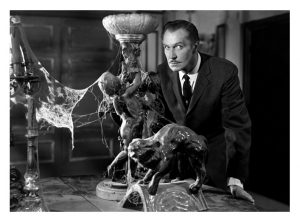 A number of people have been murdered in the house, according to one of the guests, who happens to be the house’s drunken owner (beloved character actor Elisha Cook Jr., who looks suitably jittery, inebriated, and terrified at all times).

The other guests include a crusty lady reporter, a handsome pilot, an ingénue, and a psychiatrist. They’re all on board to collect the $10K prize, but when the caretakers (Miracle Max and Valerie?) leave at midnight, barricading them inside the house with no escape, they start having second thoughts.

Mr. and Mrs. Millionaire can’t stand each other… obviously the honeymoon was over LONG ago. Each one is scheming to dump the other, and they both hope to accomplish this through the party, with the extra bonus of making five other people miserable, too.

Things go south pretty fast, and the guests are tormented with typical horror film motifs – skeletons, severed heads, grotesque caretakers and such, from the get-go. Nora, the ingénue, turns out to be one of the greatest movie screamers of all time. 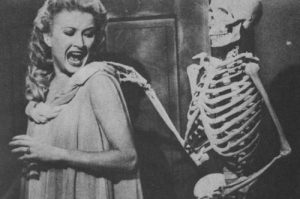 The plot twists and turns all over the place, sometimes predictably, sometimes not. The house itself is a character of sorts, a 1924 Frank Lloyd Wright mansion that was used for the exterior shots. But I’ll bet none of Wright’s other buildings are stuffed with secret passages, falling chandeliers, and the occasional walking skeleton.

Here in Pittsburgh, many older homes have a “Pittsburgh Potty” (a freestanding toilet) in the basement, but we can’t compete with the House on Haunted Hill. Its basement has an actual pit of corpse-dissolving acid that’s just begging – BEGGING! – for something (or someone?) to be thrown into it!

Vincent plays his role as always with great elegance and obvious pleasure and his ever-present delightfully dark sense of humor. You can tell he loves the scenery chewing as overwrought dialogue eloquently flows from his well-trained lips. His scheming wife (Carol Ohmart) is a classic Hollywood tough blonde femme fatale, and their verbal sparring is a lot of fun to watch.

House on Haunted Hill is indeed campy and silly, but it also delivers some effective scares. We never really see anything provably supernatural… so is the house truly haunted, or is the evil in the house created entirely by the humans inhabiting it?

Price and Castle also joined forces that same year to release The Tingler, another camp triumph that proves how well they worked together. Vincent knew how to ham it up without going too far over the top, and Castle was the master of defining where the top was.