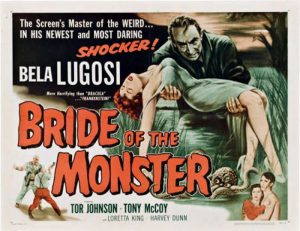 Maledicta’s Motto:  “The only bad movie is a boring movie.”

Don’t get me started on the topic of Ed Wood, who is TOTALLY NOT the worst director who ever lived.

I don’t care what anyone says, I find his movies to be fun, entertaining, and creative. I’m a tremendous admirer of Ed and his films, a subject that will be addressed in a future blog.

For now, just know that I take great pleasure in watching Ed’s movies. To me, his passion and enthusiasm for filmmaking made up for a lot of minor failings.

Pretty much everyone with any interest in the genre or in “bad” movies has seen Wood’s magnum opus, Plan 9 From Outer Space (1959). Plan 9 is a sort of cultural touchstone for lovers of 50s and 60s sci-fi/horror (often paired in that era as its own subgenre), though the evil Medved Brothers besmirched Ed’s reputation with their Golden Turkey Awards (1980), naming him Worst Director and Plan 9 the Worst Film of All Time. Again, my defense of Plan 9 as a movie that is creative, fun, and entertaining – it just WORKS! – is fodder for a future blog post.

One of the peculiarities of the Ed Wood film catalog is a series of three movies known to Connoisseurs of the Woodian Oeuvre (or Woodies, as we like to be called) as The Kelton Trilogy.  For the uninitiated, Kelton the Cop is a bumbling comic-relief policeman who appears in all three films, a minor player who became an unaccountably beloved character.

Plan 9 is the first film of the trilogy, and the third film is Night of the Ghouls (filmed in the late 50s but not released until 1982, wherein lies another fascinating story). Tonight I watched the second film in the Kelton Trilogy, Bride of the Monster, AKA Bride of the Atom.

The movie opens with a pair of hunters caught in a thunderstorm and seeking shelter at the “Old Willows Place” on Marsh Lake. It’s supposed to be abandoned, but lo and behold, there’s a light on! And who answers the door but Dr. Eric Vornoff (Bela Lugosi, in his last film speaking part), who gives the hunters the bum’s rush like a couple of Jehovah’s Witnesses. Unfortunately for them, one ends up on Dr. Vornoff’s slab, and the other becomes octopus chow.

Why aren’t visitors allowed at the Old Willows House? Because Dr. Vornoff is conducting diabolical experiments in his secret lab, with the goal of creating a race of “atomic supermen” under his control. In this project, he’s ably assisted by his supersized houseboy/lab assistant/security guard, Lobo (Tor Johnson).

When intrepid girl reporter Janet investigates the rash of disappearances, she too vanishes, which finally motivates her fiancée and his fellow cops to, you know, get involved in the search. Foreign agent/dirty Commie Dr. Strowski also attempts to abduct Vornoff to make him create his atomic supermen for the homeland (presumably the USSR!)… but Strowski also falls victim to the tentacled monster who lives in the lake just outside the lab window. 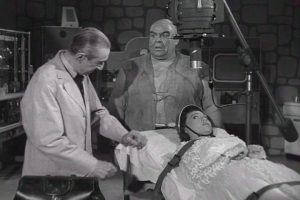 There are plenty of crazy stories around the making of Bride of the Monster. Some of them are absolutely true, some have an element of truth, and for others, there’s no corroborating evidence; however, no matter who you believe, the legend of this movie is highly entertaining.

Rudolph Grey’s book Nightmare of Ecstasy: The Life and Art of Edward D. Wood Jr. was written back in 1992 when many of the Ed Wood Repertory Players were still among the living. I highly recommend it as a resource for readers who want to read the stories of Ed’s cinematic adventures as told by the people who actually inhabited them.

I chose an Ed Wood film for tonight’s feature because this is his birthday week. On Tuesday, October 10th, Ed would have turned 93. What a shame that he passed away in 1978 at the relatively young age of 54, just as a new generation was beginning to discover the appeal of his movies. If he had lived, perhaps he would be enjoying the fruits of fame and adulation of people like me who choose to see beyond the cheese.

Would Ed ever have won an Oscar? Probably not. But like Ed, I can dream.